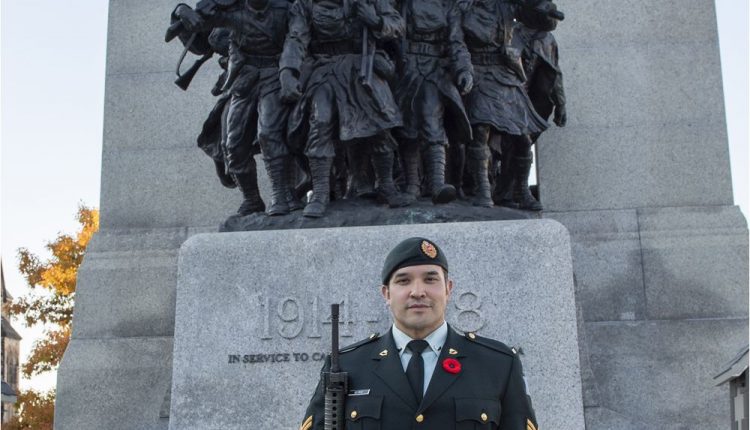 Edmonton soldier chosen to carry out at nationwide memorial service

Justin George stands at the National War Memorial in Ottawa on November 8, 2021. George is one of six members of the Canadian Armed Forces selected to attend the memorial ceremony in Canada’s capital. Photo by Corporal Jeff Smith /Corporal Jeff Smith

A Canadian Army member in Edmonton was selected from nominees across the country to attend a memorial ceremony in the Canadian capital.

Known by its traditional name swʔw̓ikist (pronounced sue-WEE-keest), Cpl. Justin George of the Penticton Indian Band has been based in Edmonton since 2014. As a squadron maintenance officer with the 1st Combat Engineer Regiment, it is his job to ensure that the vehicles of the Canadian armed forces are in good working order for exercises, tasks and missions.

But since November 5, George has been in Ottawa for practice exercises as one of six Canadian Forces selected for the Memorial Day Guard program, preparing to perform in a ceremony on Thursday at the National War Memorial in Ottawa.

George, 36, describes the honor as one of the highlights of his career.

“I am very humble that my name was chosen from so many potential incredible soldiers in the Canadian Army,” he said. “To have this honor – to be able to remember our fallen on that day in the capital of our nation – is just great.”

The Remembrance Day Guard Program, established in 1998, recognizes exceptional members of both the Canadian Armed Forces and the RCMP. Nominations for the program come from across the country, but decisions are based on field experience, community engagement, physical fitness, and track record.

George’s nomination came from Major Nathan Korpal of the same regiment that was stationed at the 3rd Canadian Division Support Base Edmonton.

“I recognized Cpl. George as a soldier who was very committed to the regiment and the Canadian army at the beginning of his career, “Korpal said in a statement to Postmedia. “He is someone who deserves recognition and is well chosen to honor our fallen in the capital on Memorial Day.”

Korpal said his decision was based on several factors, including George’s technical ability and leadership skills. He did, however, highlight the corporal’s compassion and commitment to Bold Eagle, the armed forces’ six-week summer training program for tribal peoples in Wainwright, 200 kilometers southeast of Edmonton.

“It’s a combination of military and cultural teachings,” said George, who is an instructor on the program.

A desire to help others lies beneath his commitment to Bold Eagle and has led him to volunteer for Edmonton’s Food Bank and Habitat for Humanity. This also led him to join the military more than 10 years ago, he said.

“It was almost like an unspoken duty,” said George. “I’ve always felt the need to help others, and the Canadian Armed Forces made it possible for me.”

But the experience in the capital wasn’t all work, and it brought some benefits. Leading up to the ceremony, George said he had the opportunity to visit the National War Museum in Ottawa, learn more about Canada’s military history, and even chat with Canadian Army leaders.

“You always hear from these people,” said George. “Having the chance to sit down and talk to them – that meant a lot to me.”

On Memorial Day, George added, he will also think of veterans like his uncle and grandfather, as well as “countless cousins, family and friends” who serve.

G Mike Smith returns to Edmonton after an harm setback