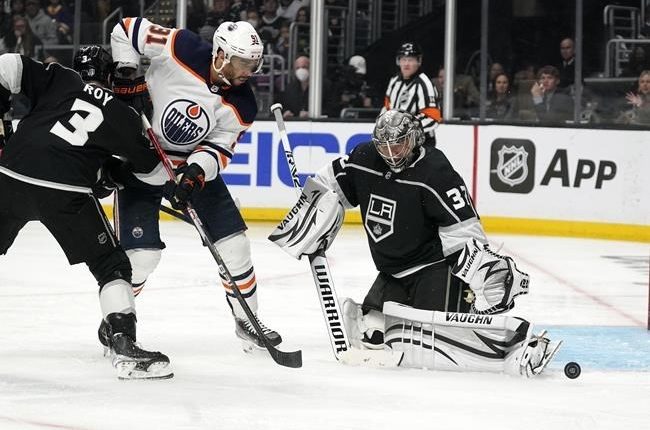 EDMONTON — Stacked with two of the NHL’s top talents, the Oilers’ power play is nothing short of lethal.

But stagnant special teams proved costly for Edmonton in Game 4 of its first-round matchup with the LA Kings on Sunday.

For the first time in the series, the Oilers failed to score with the man advantage and dropped a 4-0 decision to the Kings, tying the best-of seven series at 2-2.

“It’s the same thing across the board — power play, penalty kill, five-on-five. It’s just about working. We have to outwork those guys,” he said.

“They were working on their penalty kill and didn’t give us as many looks. When we had some looks, (goalie Jonathan) Quick stood in there. Same thing five-on-five — we have to find a way to break them down.”

Led by Connor McDavid, the NHL’s leading scorer, Edmonton was dominant with the man advantage through the regular season, finishing the campaign with the third-best power play in the league (26 percent).

The dynamic group seemed to find yet another gear early in the post-season, going 5 for 11 through the first three games.

Even in a 4-3 loss to LA in Game 1, Edmonton took the special teams battle, scoring twice on the power play and successfully defending four penalties.

“It seems that special teams in these first couple games throughout the league have been very important,” said winger Evander Kane.

“The other night we won the special teams battle lost (Game 1) and that doesn’t happen very often. (In Game 2) we did a great job again, and that’s going to have to be continued throughout the rest of our journey here.”

The Oilers’ penalty kill has also clicked in the playoffs, denying LA on all but one of its 12 power plays and netting a short-handed goal in Game 2.

“If you were to ask me before the series if there’d be this many penalties called I’d probably say no. But you need to get special teams going in the playoffs and I think we’re off to a great start,” said bruising forward Zack Kassian.

“Our PK’s been great, our power play’s scored timely goals, so if we’re going to have success in the playoffs, especially down on the road, we’re going to need that to continue.”

Edmonton’s penalty kill ranked 17th in the league at the end of the regular season at 79.4 per cent.

The Oilers’ special teams looked shaky on Sunday, though.

Goalie Mike Smith kept Edmonton from surrendering a short-handed goal early in the second period after LA’s Sean Durzi was called for holding.

Kings center Phillip Danault picked off a pass in the defensive end and sprinted down the ice for a short-handed breakaway. Smith came out of his crease to make the stop, getting his pads in position to deflect Danault’s shot out of harm’s way.

Later in the second, the Oilers got another power play opportunity when Anze Kopitar was called for holding, but the team struggled to even touch the puck early in the advantage.

“I thought we had a few chances on the power play. We didn’t convert,” he said. “But I thought it was similar to our overall game. As a team, to a man, all of us can be better.”

Woodcroft has preached the importance of staying level throughout the series, saying his group shouldn’t get too high after wins or too low after a loss.

“It’s one game at a time for us and (on Sunday), we dropped a game. It’s a missed opportunity and that’s what it is,” the coach said after Game 4. “We’ll do our work, we’ll digest the game and give our players something as a that’ll be a focal point heading into Game 5.”

Game 5 goes Tuesday in Edmonton with the series returning to LA for Game 6 on Thursday. If necessary, a decisive Game 7 will be played in Edmonton on Saturday.

This report by The Canadian Press was first published May 9, 2022.