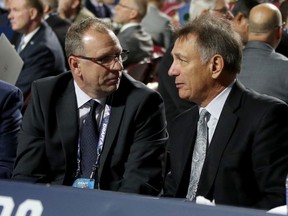 Keith Gretzky will remain Ken Holland’s right hand man in 2022-23, even as another man with a familiar surname is moving up the ranks. Photo by Bruce Bennett /Getty Images

Edmonton Oilers announced Some important housekeeping within the Hockey Ops department has now been finalized with the return of most of the coaching and front office staff.

As widely anticipated, Brad Holland has been promoted to the role of Assistant General Manager, Professional Scouting. Slightly different title, but he will replace outgoing Director of Pro Scouting Archie Henderson who will be retiring after the NHL Draft wraps up on Friday.

No doubt eyebrows will be raised at the promotion of the General Manager’s son into a prominent role, though by most independent accounts he has earned his stripes on his own merits. A lawyer by training, Holland the Younger is touted to have a strong background in analytics, an area the club needs to upgrade in the opinion of this writer. He reportedly received inquiries from several other organizations this off-season, but today’s news confirms he isn’t going anywhere other than upwards within the Oilers organization.

Oilers’ AGM and GM of Bakersfield Condors, Keith Gretzky, will also be returning in 2022-23.

Meanwhile, Jay Woodcroft’s coaching staff will remain intact other than the previously announced departure of assistant coach Brian Wiseman, who hooked up with the New York Islanders in a similar role earlier this week. The t’s have been crossed and i’s dotted on the contracts of bench assistants Glen Gulutzan and Dave Manson, as well as goaltending coach Dustin Schwartz and video coach Jeremy Coupal. The video department has been further strengthened with the promotion of Noah Segall from Bakersfield to the post of Video Coordinator.

No word yet as to who might replace Wiseman as the third assistant, nor is there any confirmation of the retention of goaltending consultant Sylvain Rodrigue, who is reportedly drawing interest from other NHL club/s.

STAPLES: Holland says Puljujarvi situation could stretch on all summer

McCURDY: What is Oil’s biggest need at the draft?