‘You just have to deal with the hand that your dealt’ 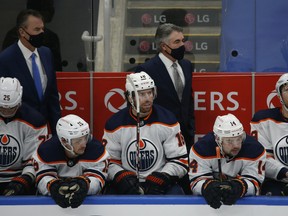 If the NHL goes ahead with Friday’s rescheduled game between the Edmonton Oilers and Canucks in Vancouver, it will be an absolute, unadulterated tone-deaf embarrassment and phenomenal failure impossible for the league to be able to justify.

It’s been a total gong show in Vancouver every week.

The Canucks were supposed to have a team practice Wednesday but didn’t.

Instead, it was changed to off-ice work and individual practice sessions.

So, that will make it ONE practice session before playing the Oilers on Friday.

“To come back and play is going to be very challenging and not very safe, if you’re asking me,” JT Miller told Vancouver media members Wednesday. “I don’t feel ready, if I’m being honest. I know everyone has a job to do but to expect our entire team to be ready to play in one practice and one pre-game skate is a lot to comprehend.

“This is nothing to do with hockey. To be brutally honest, we’re going to need more time to come back and play hockey. Even the guys that didn’t get it aren’t ready.

“It’s frustrating. We try to talk about our No. 1 priority is our players’ health and their safety and it’s impossible to achieve that with what we’re being asked to do.”

This is a Vancouver team that will have gone 22 days between games and is scheduled to return with the first of six back-to-backs with the Edmonton visit Friday and the Toronto Maple Leafs slated to visit Saturday.

The Leafs are scheduled to play the Canucks Monday to make it four games in six days. Back-to-back games at home to Calgary and Ottawa make it five games in their first seven days. A second game Saturday against Ottawa in Vancouver is followed by a flight all the way to Ottawa to play Sunday. And on the Tuesday and Wednesday, they’re scheduled to be in Ottawa and Toronto for back to backs.

That’s nine games in their first 14 days back following ONE practice to get back into game shape?

The Canucks are scheduled to play 19 games in 32 days.

The Oilers are also scheduled for three more games against Vancouver, May 4 in Edmonton, May 6 in Vancouver and May 8 back in Edmonton.

The Canucks were only able to have 14 players participate on ice Tuesday.

Some of those players will be expected to come off the list in time for them to play Friday — but not all.

In all, the Canucks had 22 players and four staff members end up on the protocol list as a result of the outbreak.

As of Wednesday afternoon, it was still game on.

“We are anticipating that we have a game in Vancouver, Friday. Until we hear different, our travel schedule and our practice plans are set up that we’re going,” Oilers head coach Dave Tippett said when I asked him the extent he might be monitoring the situation and his expectation of a possible postponement. “I guess we may have to keep monitoring it but we’re scheduled to go there (Thursday) afternoon.”

With the Friday game added in Vancouver, the Oilers are forced to fly over Alberta after the game against the Canucks, arriving two time zones away in Winnipeg at about 4 am to play their originally scheduled game Saturday against the Jets on Hockey Night In Canada.

When I asked Tippett about that, he said there’s nothing you can do about it except accept the challenge.

You should know that the Oilers are 13-3 in the second game of back-to-backs since Tippett became coach here.

The postponements and rescheduled games will have left Edmonton with nine of their last 10 games on the road.

But on the whole, they’d definitely rather be the Edmonton Oilers than the Vancouver Canucks.

Keith GereinA return to regular? This is a recap of Edmonton’s 2022, in numbers