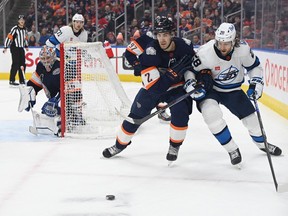 Maybe the Edmonton Oilers should have saved some of their fireworks for New Year’s Eve.

After lighting up the rafters in Seattle Friday night, exploding for seven goals in a convincing divisional triumph, the offense had nothing left but wet fuses and sad faces in Saturday’s 2-1 loss to the visiting Winnipeg Jets.

“We didn’t give up much and we spent most of the game in their end,” said Oilers coach Jay Woodcroft, whose club outshot the Jets 32-17. “In the end, we weren’t able to solve their penalty kill and their goaltender.”
Edmonton, in search of its first three-game win streak since the last week of November, swarmed Jets goalie Connor Hellebuyck all night, but only Klim Kostin’s goal five minutes into third period could beat him.

“We played the style of game we wanted to and we carried the play most of the game,” said defenseman Tyson Barrie. “Give them credit — their goalie made some big stops.

“Some nights you play well and don’t get the result you’re looking for. It’s frustrating but it’s part of the game.”
Not only did the Oilers close out the year with a loss, but Connor McDavid’s 17-game points streak also ground to a halt. McDavid had 15 goals and 19 assists in that span.

The Oilers were scoring at will in Seattle, but struggled for offense against a Jets team that specializes in staunch defending. Winnipeg is one of the stingiest teams in the NHL (their 94 goals against is fifth fewest in the league) and, as the Oilers discovered, they rarely give you anything easy.

In fact, they didn’t give Edmonton anything at all for 45 minutes Saturday and, in the end, what they gave them wasn’t enough.

“We played a pretty solid team game, didn’t give up a lot of chances and had some good looks,” said Barrie. “We had chances to get 1-2-3-4 goals and didn’t get it done.”

The Oilers were without Leon Draisaitl for the second game in a row, but the Jets aren’t shedding any tears for anyone else’s injury woes, not while they were missing seven regulars of their own, including Blake Wheeler, Nik Ehlers, Cole Perfetti and defensemen Logan Stanley and Nate Schmidt.

After scoring four goals in the first period in Seattle, Edmonton got off to another good start against the Jets, outshooting them 9-1 in the early going, but they had nothing to show for it after 20 minutes but a 1-0 deficit. Neal Pionk’s power-play goal at 15:44 stood up as the only goal

The second period was more of the same, with Edmonton swarming Winnipeg’s end but failing to make good on a number of good scoring chances. With the shots 20-10 after 40, it was still 1-0 jets.

Edmonton finally broke through five minutes into the third period on Kostin’s fifth goal in 22 games (and third in the last two) to make it 1-1 with 15 minutes to go.

It stayed tied for two minutes before Winnipeg was back in front. Kyle Connor’s deflection put the Oilers back in chase mode.

With 2:24 left in regulation, Edmonton went on a four-minute power play after Brendan Dillon’s high-sticking call on Kailer Yamamoto. It was a frantic 2:24, but just like most of the previous 57:36, Edmonton had the hands of stone and couldn’t find any mesh.

“We had four chances and didn’t get one,” said Barrie. “That’s been a strength of ours all year and it needed to step up tonight and it didn’t get it done.”

Jack Campbell got the start for Edmonton for his second game since a 4-3 overtime loss in Nashville on Dec. 19. He’s played in just three of Edmonton’s last 14 games but he was solid enough to win this one.

“We didn’t give him very much run support today,” said Woodcroft. “Any time a goalie only allows two goals it gives your team a chance to win. That’s a good sign.”

Kostin had to be helped off the ice after the final buzzer after appearing to injure his leg in a late collision… The news has been out for a couple of months but the Oilers made it official on Saturday — they will be hosting an outdoor game next october 29 at Commonwealth Stadium against the Calgary Flames.