Edmonton Oilers: Evander Kane closing in on a return 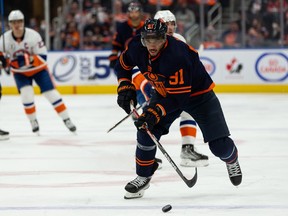 LAS VEGAS — If Evander Kane had his way he would be back in the lineup next week.

He’s traveling with the team, practicing every day, taking shots and feeling no pain.

But, in the wake of such a serious injury — it’s been just over two months since he had his wrist sliced ​​to the bone by a skate blade in Tampa Bay — and with the stakes as high as they are, it’s not up to him.

So, Kane will meet with a doctor when the Oilers get back to Edmonton and find out what the return-to-play strategy is really going to be.

If general manager Ken Holland had to make a prediction, it’s that the impact winger will be back before the All-Star break.

“I’m saying two weeks,” said Holland. “I think that’s the long end. I hope it’s going to be sooner than that. Certainly he’s on the horizon. He’s a big part of our team and we’ve missed him.”

That’s great news, considering the original prognosis was closer to three or four months. The fact Kane is able to make any sort of comeback at all speaks to the calm, efficient work of the training staff, medical personnel and surgeons.

“That injury was a major injury, a traumatic, horrific injury,” said Oilers coach Jay Woodcroft. “We’re thankful we had our great medical people there. Not only did they save his life, but their quick action made sure he was able to get into surgery quickly and the doctors in Florida did a great job.

“I expect him back sooner than most people think. He’s champion at the bit. He’s been in every practice for a while now. He’s sick of getting extra-skated at the end. That’s driving him to heal fast.”

With five points in two games against Anaheim and San Jose, Ryan Nugent-Hopkins continues his assault on his personal bests for goals (28), assists (41) and points (63) in a season.

He’s currently at 21 goals, 32 assists and 53 points with just under half a season to go and sits second only to Connor McDavid is points scored by a Canadian-born player this season, ahead of the likes of Mitch Marner and Sidney Crosby.

“Guys are putting me in good spots to put the puck in the net and I’m trying to bear down as much as I can,” he said. “I’m definitely getting some good passes and some good looks, I’m just trying to finish as much as possible.”

The Oilers have only had one losing road trip so far this season — the New Jersey, New York Islanders and Rangers swing in late November. They’ve either won or gone .500 on every other trip for a 13-7 record heading into Vegas.

They need to shore things up at home, though. That 10-11-2 pace is not going to get them into the post-season.

“We like playing on the road, we’ve always been a pretty decent road team the last couple of years,” said McDavid. “But we have to figure home ice out. You have to win on home ice, that’s what good teams do.”

Asked why his team is so much more successful on the road, Woodcroft admits he’s at a loss.

“No, can’t explain it. In the end it’s something that we’re going to have to take care of.”

Optional morning skates are typically reserved for rookies, healthy scratches and players who don’t get a lot of ice time in a game. Veterans take part on occasion, but usually exercise the option to stay off the ice.

And then there’s Darnell Nurse. He’s been in the league for more than 500 games and routinely longs 25-plus minutes a night, but he’s out there for the morning optionals like clockwork.

“I just like to go out there and get a feel,” said the 27-year-old. “It’s just become part of my routine. A lot of times you have the younger guys out there who are working their way in and sometimes it’s good to have a vet out there and kind of help out in that department.”

It would seem wiser to conserve his energy, but Nurse doesn’t feel that being out there in the morning is a drain.

“I’m napping all afternoon. I’m doing everything to repair and rest. You go out for the morning skate just to get a feel; you’re not doing down and backs and bag skating.

“It’s fun to go out on the ice and just pass around the puck, shoot the puck. I have been using the option a little bit more this year, but I still like to go out there most days.”

Woodcroft leaves it up to the talent to decide whether they need to go for a morning twirl or not.

“Players are the best judges of what they need to do to be ready for the evening,” he said. “Some guys are big in getting a little bit of an off ice workout, other guys like the puck touches that come along with going out there.

“There are different philosophies on it. Sometimes players are just bored during the day.”

Porter Airways will quickly be flying from Edmonton to Toronto