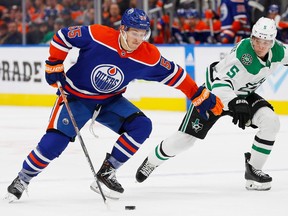 NEW YORK — The points aren’t coming, he’s been injured, he’s made some glaring and costly turnovers and there are already people wondering out loud if Dylan Holloway might be better off boosting his ice time and his confidence in the minors.

In other words, things are pretty much on schedule.

Ask Leon Draisaitl. He doesn’t just understand what Holloway is going through — he lived it.

Draisaitl, a highly-touted third overall draft pick, played 37 games with the Oilers in 2014-15 and managed just nine points, with a minus-17 rating that tells you he was on the wrong end of a few premium turnovers himself.

So, the Oilers sent him back to junior for the second half of the season for a deep playoff run with the Kelowna Rockets. He was named Memorial Cup MVP and looked ready to make his mark on the big leagues.

The following season? The Oilers cut him into training camp and he started the year in Bakersfield, where he had two points in six games.

It was slow progress.

But, within a few years, he grew up to be Leon Draisaitl, a 50-goal, 100-plus point guy widely regarded as being one of the three or four best players in the league.

“It’s a really, really hard league when you’re young,” said Draisaitl, now 27 years old. “It’s a hard league as a young guy to come in and make an impact immediately. The game changes a lot from junior or college to the NHL. Some guys take an extra year, an extra two years, sometimes longer.”

But Draisaitl has seen enough of Holloway to believe that he is going to be everything the Oilers hoped he would be when they drafted the six-foot-one, 203-pound winger 14th overall in 2020.

“I think there are a lot of tools in his game that are very promising. Sometimes you just have to give a guy an extra year to figure out his footsteps a little bit in the league. He’s finding his way. I think he’s doing really well with what he’s given. He’s going to be a really good player for us,” Draisaitl said.

Making Holloway’s jump even more difficult is the fact he missed almost a year with a wrist injury that required two surgeries and then got knocked into concussion protocol three games into his NHL career.

“He’s been through a lot over the last couple of years,” said Draisaitl. “Everybody sees what he can do and what he will be able to do in terms of his skill set and work ethic. I see it, too. He’s going to be a really, really good NHL player. Sometimes you need to have a little bit of patience.”

Whether that patience should involve playing six to 10 minutes in the NHL, like he’s been doing most of this season, with a few exceptions (15:15 against Carolina, 11:35 against Dallas) or playing 20-plus minutes and piling up points in Bakersfield is the ongoing question.

Woodcroft, who is already down Evander Kane and Kailer Yamamoto, knows that Draisaitl and Connor McDavid need all the offensive backup they can get. He would love it if the kid could put together a run of productive nights, but those slim margins he’s talking about , with the Oilers barely above .500, dictate the ice time and the lines.

“We’re trying to find ways to plug some of those holes and elevate people in the lineup and when Dylan is playing really well he gets elevated and when other people play well they get elevated.”

Holloway has only played 33 career AHL games and 15 in the NHL, so nobody is telling him to hurry or wondering what’s wrong. For the time being, the play is to give him more time up here to see if things start to click.

“He’s in his professional year, and he’s had a tough go with injury,” said Woodcroft. “He’s finding out what his capabilities are at this level. What he can do, what he can’t do, where pucks have to get to and how important it is to defend and be a positive player. He’s finding his way.

“I’ve seen some growth in some areas. He’s someone we’re very bullish on in the long term because he does have a lot of raw materials to be a very good hockey player.”

If you ask any young player where he’d rather be — in the NHL lifestyle or busing around in the AHL — it’s no contest. Still, Holloway admits this league definitely takes some getting used to.

“It’s a learning process for sure,” said the 21-year-old. “There is stuff you can get away with in the AHL and NCAA that you can’t in the NHL. It’s just stuff I’m learning. I feel like every game I’m taking strides and hopefully I will earn a little bit more opportunity and with that try and generate some offense.”