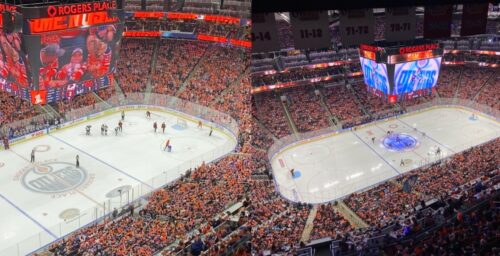 Edmonton Oilers fans didn’t get the ending they wanted Saturday night against the Avalanche, but the crowd sure did love seeing Ryan Whitney and Oilers icon Ben Stelter appear on the jumbotron.

Ryan Whitney of Spittin Chiclets was seen flat-out chugging a bottle of Pink Whitney, which the crowd went absolutely gaga over.

I will say #Oilers crowd LOST it over @ryanwhitney6 chugging some Pink Whitney pic.twitter.com/eIfFQPwwOM

Stelter, who has a type of brain cancer known as glioblastoma and has become an absolute fixture for the city and the Oilers, was also shown on the jumbotron along with his family.

#Oilers crowd was defs at its loudest when Ben and the fam were shown on the jumbotron pic.twitter.com/1noxzfLfNX

The Oilers fell to the Avalanche 4-2 in Game 3 on Saturday night, and the Oilers are now on the brink of elimination.