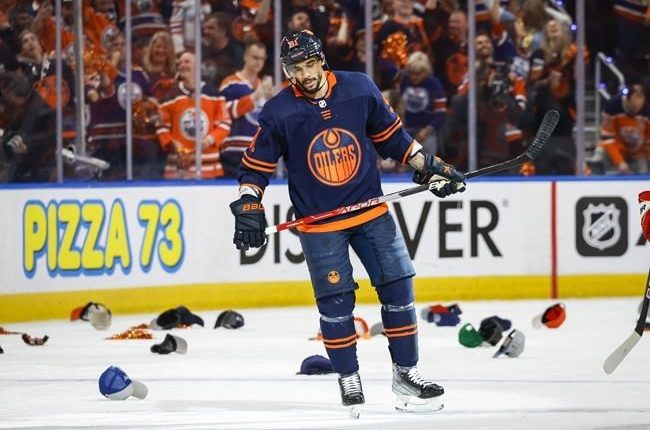 EDMONTON — Evander Kane knows he left money on the table when he re-signed with the Edmonton Oilers.

He’s willing to take the hit if it means chasing hockey’s ultimate prize.

“I want to win and in order to win, you need to have more than one or two players,” Kane said after agreeing to a new deal with the Oilers on Wednesday.

The 30-year-old Vancouver native was set to become a free agent and had been given permission by the Oilers to talk to other clubs. In the end, he opted to sign a four-year contract with Edmonton, a deal that carries an average annual value of US$5,125 million.

“I think with Edmonton, this is the first real chance where I’ve kind of been free to choose where I want to play,” Kane said. “The guys and the team and the organization, it just seems to fit really, really well together.”

“I’m excited and feel good about what we’ve done today, but I know that there’s more work that needs to be done here over the next couple of months,” Holland said.

The Oilers initially signed Kane on Jan. 27 after the San Jose Sharks terminated the remainder of his contract for violating COVID-19 protocols while in the American Hockey League.

Kane is challenging the Sharks’ decision by filing a grievance through the NHL Players’ Association.

“Obviously I feel my contract was wrongly terminated and I think the facts and the evidence and what’s written in the contract back that up immensely,” he said. “I look forward to continuing that grievance and being successful.”

If an arbitrator rules in Kane’s favor, it could mean his contract with San Jose is reinstated, and he goes back to being a member of the Sharks.

“For me, it all comes back to Evander wants to be in Edmonton and he wants to play for the Edmonton Oilers,” Holland said Wednesday. “And I am comfortable that is going to happen.”

Kane made an immediate impact in Edmonton, scoring 22 goals and adding 17 assists through 43 regular-season games.

“He fit in real well,” Holland said. “At the end of the year when we went through our exit interviews with the players — to a man, everybody in that locker room wanted him back.

“We were a much better team with Evander on the team.”

He continued to provide an offensive punch in the playoffs with a team-high 13 goals in 15 games as the Oilers reached the Western Conference final from the first time since 2006.

Another key piece in Edmonton’s playoff run was goalie Mike Smith, who is likely to end up on long-term injured reserve.

“I’m not expecting Smitty to play this year,” said Holland. “He has a lot of health issues”

To fill the hole, Edmonton signed Campbell, 30, to a five-year deal with an average annual value of $5 million.

“He looks to be from afar a guy who’s getting better all the time. He’s competitive, he’s accountable,” Holland said. “And I think with Stu Skinner, we’ll have a good tandem.”

Campbell spent the last three seasons with the Toronto Maple Leafs, taking over starting duties last season after the departure of Frederik Andersen for Carolina.

He was 3-3-1 with a 3.15 GAA and an .897 save percentage as the Maple Leafs were ousted by the Tampa Bay Lightning in the first round of the playoffs.

Campbell’s future in Toronto was all but ended when the Maple Leafs acquired goaltender Matt Murray from Ottawa on Monday.

Originally selected 11th overall by Dallas in the 2010 NHL entry draft, Campbell has played seven seasons in the league, spending time with the Stars, Leafs and LA Kings.

He will be counted on to stabilize Edmonton’s crease after an up-and-down season from veteran Smith and the departure of Mikko Koskinen to HC Lugano in Switzerland.

Campbell will share the net with 23-year-old Skinner, who split last season between Edmonton and the American Hockey League’s Bakersfield Condors.

Holland said it was also important to bring back Kulak, who returns to Edmonton on a four-year contract with an average annual value of $2.75 million.

The 28-year-old was acquired by the Oilers from the Montreal Canadiens at the trade deadline in March and had two goals and six assists in 18 regular-season games with Edmonton.

“I thought he came in and did everything we could have hoped and more,” Holland said, adding that Kulak is hitting his prime, is good defensively and is well-liked in the locker room.

The Edmonton-born rearguard added five assists and had a team-leading plus-7 defensive rating in 16 playoff games.

Kulak was selected by the Flames in the fourth round of the 2012 draft and has 64 points (15 goals, 49 assists) in 334 career NHL games with Calgary, Montreal and Edmonton.

This report by The Canadian Press was first published July 13, 2022.

Indoor eating has returned to this iconic Edmonton bakery