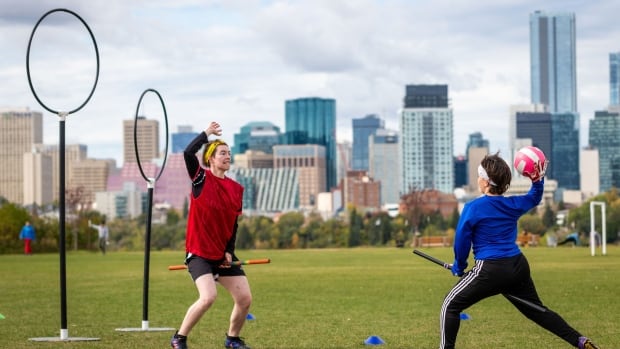 Veteran and rookie quidditch players across Edmonton are preparing to mount broomsticks, as they vie for a citywide title Saturday.

The annual Edmonton Quidditch Cup, a tournament that runs from 10 am to 3 pm at Mill Woods Park, will feature national-level athletes as well as entry-level competitors who may have never played a match before.

“It’s so fun,” said Jasper Whitby, a quidditch player and vice-president of the Edmonton Aurors. “I’m so excited to play quidditch again.”

Quidditch, the sport played by witches and wizards in the Harry Potter series, combines elements of soccer and basketball.

In the movies, two teams soar through the air on brooms over a pitch. Forwards try to score by throwing a ball — the quaffle — past a goalkeeper and through one of three hoops. Each goal is worth 10 points. The game is over when the seeker catches the Golden Snitch, a small golden ball with wings that’s worth 150 points.

In the muggle version of the sport, founded in 2005, the quaffle is a slightly deflated volleyball and the Golden Snitch is worth 30 points. Players still ride brooms — although, they aren’t airborne.

Jasper Whitby, vice-president of the Edmonton Aurors, hopes to build a safe community where people of all identities feel comfortable competing in quidditch. (Submitted by Jasper Whitby)

Every year, local players aged 16 or older compete for the Edmonton Quidditch Cup. Participants of all athletic abilities gear up for the tournament, before their regular season starts in September, Whitby said.

The number of teams competing Saturday will depend on how many players register, Whitby added.

Part of encouraging new people to sign up means making the sport even more inclusive for people of all genders and athletic abilities.

Whitby, who is non-binary, started playing quidditch in the fall of 2018, after their sister convinced them to give it a shot.

Whitby uses them instead of the gender-specific pronoun she or he.

“This is the coolest sport ever,” Whitby recalled thinking at the time. “I’m absolutely hooked.”

Three months later, they were vice-president of his club, they said.

Whitby had always struggled to find a sport that made them feel included, they explained. Even co-ed athletics required competitors to sign up as either male or female, so they could never declare their true gender identity during registration.

Quidditch offered in an inclusive environment, however.

“It really allows you to be who you are, which is not how most sports work,” Whitby said.

For Jon Golla, a competitive quidditch player and coach, joining the Edmonton Aurors was an eye-opening experience. 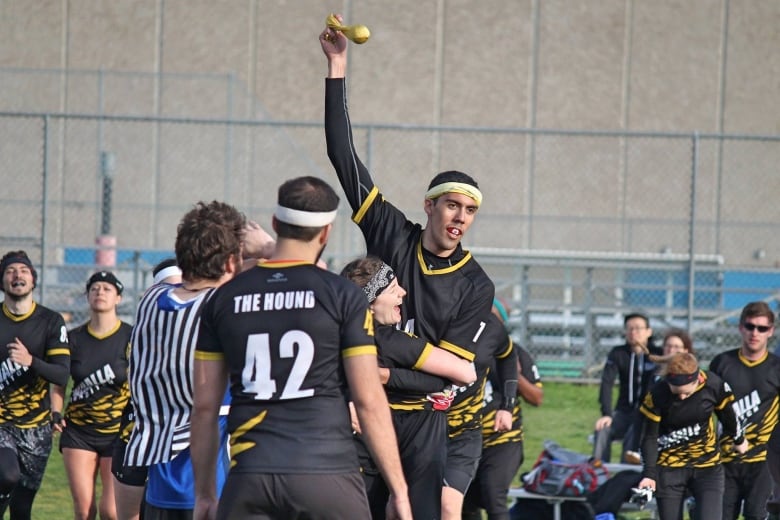 “It’s really cool to see that people who are non-binary, people who identify as trans, have somewhere to play something competitive and meaningful,” Golla said.

“In any other sport, they may not be allowed to compete at higher levels.”

Golla will be competing at the Edmonton cup Saturday and is excited to share his passion for inclusive sport with first-time players.

Quidditch stems from the beloved fictional Harry Potter series, written by JK Rowling. But many quidditch players and enthusiasts around the world have yearned to distance themselves from Rowling’s transphobic views.

Major League Quidditch — a national league with teams throughout the United States, as well as Toronto and Ottawa — and US Quadball, the States’ national governing body of quidditch, have already changed the sport’s name to quadball.

Quidditch Canada, the national governing body, has yet to adopt the name change, but it’s planning a rename in January.

“I have really mixed emotions about the name change,” said Cayley Mendoza, a quidditch player and the Edmonton Aurors’ spokesperson.

Mendoza grew up reading Harry Potter and still has an emotional connection to the series. But she was hurt by some of Rowling’s remarks, thus recognizing the need for space.

“It’s really important to create distance and to create our own future that we can shape in ways that are positive for our community,” Mendoza said.

Whitby wants to carve a space where everyone feels safe practicing quidditch and competing in tournaments — regardless of how they identify.

“Gender is where we started, but we’re trying to expand that as best we can,” they said.

“We’re never going to be perfect, but we’re really trying to make sure that any marginalized identity can feel comfortable and safe.”