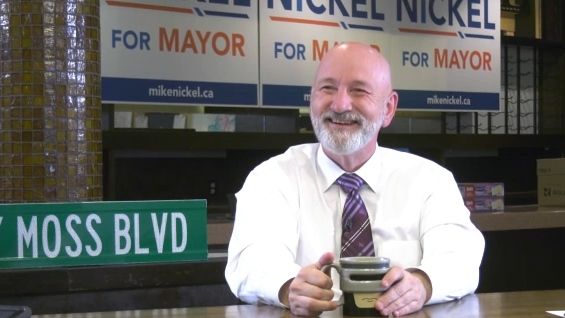 After three terms on the city council, Mike Nickel says it’s time for change and he’s the one to lead it.

“Nothing less than a complete mechanical philosophical overhaul of the town hall is required,” said Nickel.

“Somebody has to come in and try to fix it.”

“We have so many things in the city that break mechanically that we are just at the point where we need to stabilize the situation.”

He promises to cut management, consultants and bureaucracy in the town hall.

“We have to be a city that builds things,” he said. “I focus very much on starting small and medium-sized companies for an export-oriented economy”

“You have to mow the grass, you have to pick up the garbage, because if you don’t, people will stop bothering about it.”

He also describes the development of the city’s West LRT as “the worst business decision” the city has made and would like to revisit the subject of cycle paths.

“The bike paths as we are building them now … are at the expense of common sense and the road.”

‘PROUD OF MY RECORDS’

Nickel says the outgoing council he was part of focused on the wrong priorities.

“We still want to talk about gondolas and funiculars … if you like that, I’m probably not your candidate,” he said.

“I focus on trade and industry,” he says. “Many of the problems we come from are downtown.”

“If you don’t have security downtown, you can’t bring business downtown.”

Nickel’s last tenure as a councilor was marked by an often combative relationship with other council members.

In July, the city’s integrity officer found that some of Nickel’s social media posts were in violation of the council’s code of conduct.

He also had the lowest attendance of any city council during that tenure, according to an analysis by CTV News. He declined to comment on the story and also skipped most of the mayoral candidate forums leading up to election day.

Nonetheless, Nickel says he stands by his track record in town hall.

“I am proud of my record. You have to walk alone, ”he said of other councilors.

“The time to talk is over.”

GET TO KNOW YOUR CANDIDATE

What’s your favorite food in town?

“It used to be RoseBowl Pizza,” he said of the downtown restaurant, which closed in 2016.

“When I’m downtown it’s usually Chop steak bites and when it’s breakfast it’s usually IHOP on the south side.”

What is the best summer activity in the river valley?

The Art Gallery, the old pool in front of City Hall and Churchill Square.

Do you have any hidden talents or hobbies?

“I think a lot of people are surprised that I collect movie soundtracks,” said Nickel, adding that he has around 700 in his collection.

He also plays the clarinet and saxophone and is self-taught on the piano.

What was the last book you read?

Nickel says he has preferred nonfiction books since childhood.

What kind of sport do you play or watch most?

“I used to enjoy playing baseball. But I used to go to Mill Woods like every kid and play a lot of football, ”he said.

“I enjoy swimming quite a bit.”

What did you want to be when you grew up?

“I’ve always loved the business,” said Nickel. “I wanted to be that type of company in the corner office who lived the 80s lifestyle,” he said with a laugh.