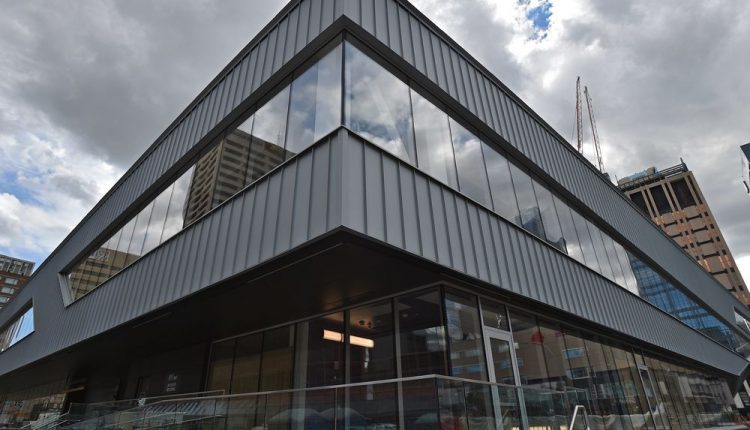 Edmonton has a love-hate relationship with unusual trying buildings

The Stanley A. Milner Library has been criticized for looking like a tank or a shipping container. Photo by Ed Kaiser /Postal media

Whether it’s “bibliotank”, our European faux pas or a preference for pyramids, Edmonton’s architecture is twisted into the eccentric.

“There really aren’t any other cities like this,” says Trevor Boddy, who grew up in Edmonton, Vancouver-based architecture critic and curator on the phone from Trail, BC. “It’s a multicultural city. We like diversity and there is no single control over what is built, what I like. “

In an essay that Boddy wrote for the Art Gallery of Alberta several years ago, he explained why Edmonton embarked on such a disorganized path of building design. Geographical isolation, a pioneering spirit, and a strong penchant for constant reinvention have kept the city zigzagging through architectural phases that Washington DC, for example, cannot with its strict controls over what a building looks like.

A city like Amsterdam will forever look like we imagine Amsterdam, but Edmonton never ceases to surprise. It’s the Wild West out there, and much like the anarchist Freetown Christiania commune in Copenhagen, where buildings range from shacks to futuristic apartment buildings, anything is possible.

According to Boddy, Churchill Square is where the best examples of Edmonton’s unique design can be found.

“I could do a whole architectural history seminar in Churchill Square for the semester,” he laughs. “There’s every kind of trend out there, which is pretty cool, with examples from the 1960s to the 21st century. Edmonton seems to find its architectural identity through the back door with this dinosaur park of buildings: a steel brontosaurus, a sandstone triceratops. “

The buildings around the tree-lined concrete plaza that hosts many of Edmonton’s summer festivals aren’t exactly unique to Edmonton, but they’re a bag Boddy won’t find anywhere else. From the postmodern Edmonton City Hall “built for 1,000 years” to what Boddy calls the Art Gallery of Alberta’s “Bargain Basement”, the critically acclaimed Shoctor Theater to the newly opened Stanley A. Milner Library, the square dizzying in its lack of homogeneity. Ask any Edmonton about these and other buildings and it will likely reflect an answer based on their personal tastes: a desire for more international attention, a desire for practicality, or simply inherent conservatism. Throw back the final trait to Boddy and he will point out that this is not unique to Edmonton.

“I think people are conservative everywhere, maybe even more so in Vancouver, where I live. I mean, check out our library which was designed like a Roman Coliseum by the very talented architect. He was instructed to do so by the mayor because they allowed a public vote on it in shopping malls. “

With: The dinosaurs could attack any minute

The Art Gallery of Alberta is one of the unique buildings in Churchill Square. Photo by David Bloom /Postal media

We can only hope that somewhere in Old Strathcona a giant replica of the Roman Colosseum will be built for all of us to fight for, but in the meantime, here are a few other interesting designs that add flavor to the city’s architectural heritage:

The Stanley A. Milner Library

Edmontoners weren’t the only ones amazed when the outside of the revitalized downtown library was first revealed last year; People around the world made a point of weighing up. And why not, considering that the city had apparently decided to take the term “war on illiteracy” more seriously with what (from the outside) should look like the kind of space-time vehicle Lemmy sang about in Silver Machine. Now that people are finally seeing the inside, there is an opposite opinion, but some still wonder when the building will be uprooted and guns rolling over Clareview with fire rifles.

With: Will possibly silence the other buildings.

The uproar when images of the Manchester Square development in Queen Mary Park hit social media last spring was considerable.

Described by Anton Morgulis, CEO of the developer group, as an allusion to the architecture of Amsterdam, the colorful mall with its tall, thin and basic-colored Old World facade was immediately hit with a wave of derision from some sides. One Twitter user mockingly compared it to Europa Blvd on West Edmonton Mall, while another complained that the city should stop “trying to be fake versions of other places and build something locally inspired”. Others found the piece Faux Europe, which at some point will come up with features such as an outdoor fountain, promenade, and indoor alley, charming and eye-catching. It definitely stands out on 107 Avenue, a sensory experience alongside a dental office and Mister Frame.

professional: It fits very well that a cannabis shop is one of the first tenants.

With: A sad lack of channels.

A representation of the development of Manchester Square at 107 Avenue in Queen Mary Park.

It’s largely been forgotten, but architect Gene Dub had a completely different idea for a new town hall back in 1988: to make it look more like Three Mile Island. This is a joke, my son; Dub’s original vision of four “futuristic tipis” overlooking the building was intended as a gesture to the First Nation peoples. The Edmontoners disagreed during a poll, however, and Dub instead replaced two eight-story pyramids as a hat-tip to the Rockies, which everyone and everyone seemed to be better. The Friendship Tower (which marked 125 years of Confederation) at the front of the building was a lovely addition with its 23 bells and 99 pre-programmed songs, luckily none of which are We Built This City on Rock and Roll.

professional: Pleasantly airy common room on the ground floor thanks to natural light streaming through the pyramids.

With: Could be mistaken for a Pink Floyd cover.

Edmonton’s buildings have given us a lot to talk about, and like most cities, we love to. We are torn between the constant need to assert ourselves as the city of the future and the desire for heritage and tradition. The opposite of this, of course, is our tendency to tear down historic buildings in the blink of an eye, which Boddy also laments as part of our boomtown mentality. He would also like to see the city use our talented local architects instead of shopping outside.

“There are some really good ones out there,” suggests Boddy, who still visits his family in town every year and keeps up with changes. “The problem is, Edmonton wants references, it wants to be important. There’s this idea that the best come from somewhere else, but the city needs to develop its own and give them a break, like it gave Vancouver or Toronto architects a break 15 or 20 years ago. “