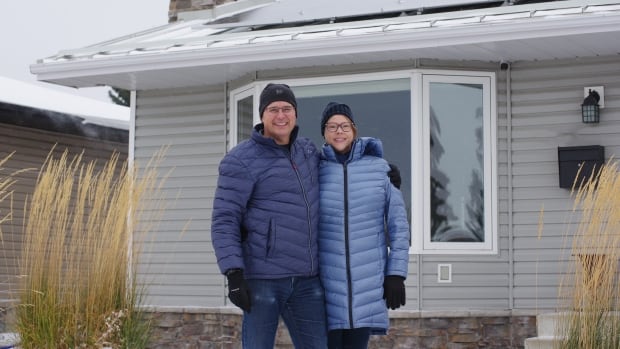 What started as a small renovation project turned into a fight against climate change for an Edmonton couple who have spent over two decades transforming their bungalow into a net-zero home.

Darren and Darcy Crichton wanted to insulate their modest 1969-built bungalow in the Kilkenny neighborhood of northeast Edmonton when they noticed how drafty it was.

Their initial intent was to save money and make the house more comfortable.

“We strongly believe that climate change is negatively impacting us,” Darcy said in an interview with CBC’s Radio Active.

“We became aware that really, there were things we could do that actually made our lives better and also contributed less to climate change.”

The couple only started working to reduce the home’s carbon footprint after first tackling an insulation upgrade.

“The insulation part was the big step, and then once we got our house sealed up we wanted to install solar,” Darren told CBC Edmonton’s Radio Active.

Installing the ground source geothermal system was the most significant renovation they had done, Darren Crichton said. (Envirotech Geothermal Ltd)

“And we did most of the work ourselves,” Darren said. “It’s not inexpensive, but it was over 20 years.”

Darcy said they were ahead of the curve in being environmentally conscious about their house, and didn’t get subsidies until they decided to install solar panels.

Darren said he promotes solar energy to anyone wanting to reduce their reliance on the electricity grid.

“I’m very much convinced that solar pays off in seven years and the federal government has a program right now where they’ll provide a subsidy in addition to interest-free money,” he said.

Solar panels are arrayed on the roof of their home and their two detached garages in a horseshoe shape.

Lists | Darcy and Darren Crichton talk about their project.

Darren and Darcy Crichton have spent more than 20 years turning their home into a net-zero emitter.

The most significant renovation the Crichtons did was to install a geothermal, or ground-source energy, heating and cooling system, Darren said.

They had to dig five wells on their property, each more than 75 meters deep. The heat is recovered with the use of a heat pump.

“We run a mixture of ethanol and water through these wells in the front yard and it extracts heat out of the ground, and we return it back to our furnace,” Darren said.

The couple’s renovation story has been featured on a website for Change for Climate, a City of Edmonton program aimed at reducing the city’s greenhouse gas emissions.

Heather Wheeliker, program manager for community programs with the city’s environment and climate resilience unit, said the program has been successful.

“We’ve got initiatives that are offered to various different sectors across Edmonton and we’re seeing really good uptake of those rebates and capacity building programs,” Wheeliker said.

The City of Edmonton has a list of actions people can take to reduce their carbon footprints, such as drying clothes naturally, leaving grass clippings on the lawn, and commuting by transit.

The actions are rated on a scale from one to five based on how they contribute to the city’s greenhouse gas emissions.

A number of municipal programs are available to Edmontonians wanting to renovate their homes.

The Home Energy Retrofit Accelerator (HERA) provides rebates for insulation, windows, water and space heating equipment. It is available to homeowners who have spoken to an energy adviser and have had a home energy evaluation.

Energy advisers conduct audits for homeowners and offer solutions to help them reduce their energy consumption.

Under the HERA program, homeowners can add better insulation, triple-pane windows, and a newer heating system.

About 2,000 Edmonton residents are taking part in the HERA program. Due to the high level of participation the city is currently facing a backlog in HERA applications.

The city also offers a solar rebate program for solar panel installations. The program will cover about 15 per cent of the cost.

However, as of Sept. 2, the program is no longer accepting applications. It ran out of funds after allocating $2.1 million in rebates this year.

Homeowners can apply to the federal government’s Greener Homes Initiative for grants and interest-free loans.

Darren Crichton notes that choosing a more energy-efficient lifestyle isn’t necessarily restricted to people who own their own homes.

“You don’t have to own a house to minimize your carbon footprint,” he said, adding that something small like supporting locals and buying sustainably would help.