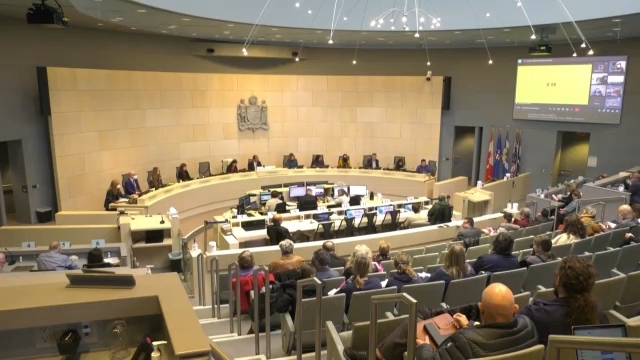 City council hosted the first public hearing for community feedback on the next four-year budget Monday, with many asking for more transit security and investment in recreation.

That supports $7.75 billion over the budget cycle in capital investments, including maintaining the aging High Level Bridge and Hawrelak Park reno, and $3.2 to $3.5 billion annual operating expenditures.

All of that is before council makes any adjustments to the proposed budget drafted by city administration.

More than 150 people have registered to make their five-minute pitch for city money. Here are some key themes from the dozens of speakers on Monday:

He hoped the city would increase its number of TPOs from around 90 to 130 or 140, a 65 per cent increase, in line with the amount the City of Calgary currently employs.

“There’s two elements to that,” Bradshaw explained to reporters. “Safety is paramount, of course, but people need to feel safe before they’re really going to be comfortable to come and go riding the system.”

According to him, the city’s TPOs are not sufficient, with daily drug overdoses and security concerns, causing many to work overtime.

“There’s violence (on the LRT and buses). It’s ongoing, and it’s every single day. I feel quite badly for them because it’s hard,” Bradshaw said. “They are fatigued. They are overworked.”

He was critical of the city’s $13 million investment in the regional transit commission, a new organization aiming to harmonize the various public transit authorities in the greater Edmonton area.

“Frankly, they’re not giving us anything for that,” Bradshaw said. “Except for paying expensive CEOs and COOs wagers.”

“There’s really no value there for us,” he said, adding that the Arc card e-fare payment system is already offering riders better opportunities to use other regional transit service options.

Instead, Bradshaw said the city needs to fund a roughly $15 million proposal, intending to increase the number of Community Outreach Transit Teams and Transit Community Action Teams, which pair social workers with TPOs.

Several speakers asked councilors to consider supporting grants and investments in recreation centers to promote healthy living in the city.

James Rosnau, Edmonton Sport Council (ESC) chairperson, called on the city to reinstate the sport portion of the Community Investment Operating Grant — the only one available to non-profit sport groups.

“Edmonton’s amateur sport and active recreation sector is the largest of all volunteer sectors,” he said.

ESC needs $178,000 in one-time funding in 2023 to transition grant administration from the city. That proposal is unfunded by the draft budget.

Gary Shelton, ESC executive director, reminded council that if they move ahead with downsizing plans for the new Lewis Farms Recreation Centre, the city will lose out on opportunities to host swimming competitions.

Further, Shelton said it would jeopardize a long-term plan offering aquatic athletes a place to practice should Kinsmen close to get upgrades to meet international and national competitive specifications.

Spokesperson Kelly Cromwell said survey responses indicated that some are traveling across the city for swimming lessons, with some even going to St Albert or Spruce Grove. That has prompted St Albert to implement proof of residency requirements for their lessons.

Free Play for Kids founder Tim Adams wanted council to fund a $600,000 to help the organization grow programming and opportunities for vulnerable and low-income youth to participate in sports.

The organization uses sport as a tool to help promote belonging and mentorship to raise the next generation of leaders, Adams says, while ensuring any kid has the opportunity to play sports without worrying about cost barriers.

She called out the city for flunking its first carbon budget, saying more emphasis should be placed on using rapid bus transit instead of LRT expansion, which adds more parking lots at the end of the lines.

In her view, the city should create an office of the environment to help co-ordinate serious climate action and environmental monitoring.

Harvey Voogd, a North Saskatchewan River Valley Conservation Society member, was disappointed that the council-directed funding package to create a river valley trail strategy was unfunded in the proposed budget.

The city has more than 160 kilometers of city-maintained trails and hundreds of other informal trails. Voogd said about the pandemic, more people were using them and that a growing number of unsanctioned trails are being made in the river valley that damage the ecosystem.

“Action is needed right now,” he said. “The lack of a trail master plan has become a contentious public issue involving both river valley users and residents who live adjacent to our river valley and ravine system.”

Tammy Wiebe, executive director of the zoo’s development society, asked councilors to push ahead with the second phase of a modernization program for the Valley Zoo.

Already twice delayed, Wiebe said councilors should push the project back further, the project will cost more as corporate donors and fundraising money that have already been held for five years would be in jeopardy.

“If we delay it again, it will be almost 12 years before this project is brought to fruition and that’s when society first paid for these designs,” Wiebe said.

“The zoo is not an outdated, unpopular attraction,” she added. “In its worst, it is your second busiest attraction. In it’s best, in the last couple of years, it has been your first.”

“The demand is unbelievable,” Storvold told reporters, adding that C5 serves 800 families or 5,000 people a month, with many others on a waiting list.

“People are complex, and their problems need to be addressed holistically. That’s the real value in the C5 is the idea of ​​bringing in the specialties of each of the five agencies that really function to really wrap around people.”

IN PHOTOS: Blue Jays’ Edmonton go to flies over effectively with followers – Edmonton