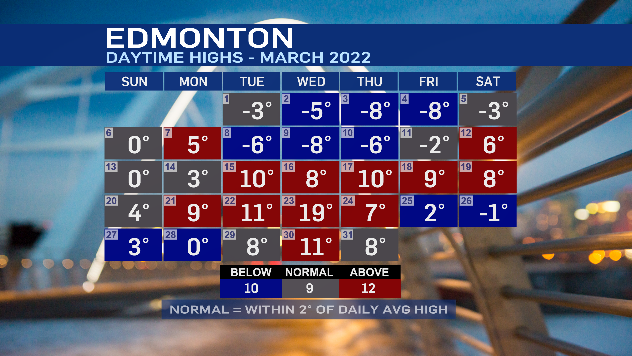 The numbers for March 2022 are in and it was a pretty average month of temperatures.

Edmonton’s Blatchford weather station had 12 days above average, 10 days below average and 9 average days. (note: daytime highs within 2 degrees of the daily average are considered “average”)

The monthly average high came in at 2.8 degrees. That’s about half a degree ABOVE the long-term average of 2.2 degrees.

The monthly average low for 2022 was -7.5 degrees. That’s about half a degree BELOW the long-term average of -7.2 degrees.

The number of days with highs above zero, above 10 degrees AND with temperatures below -10 degrees all came in right on par with the historical “normal”.

Precipitation is a bit harder to calculate, given the uneven nature of spring snow distribution. We also have to look at the EIA weather station for snow stats because Blatchford doesn’t keep those numbers.

March 2022 had 25 mm of precipitation at Blatchford. That’s well above the long-term average of 16 mm.

Snowfall at EIA totalled 22 cm this year. That’s a bit above the long-term average of 18 cm.

It ranks as the 6th-most March snowfall in the past 10 years (so…not that impressive).