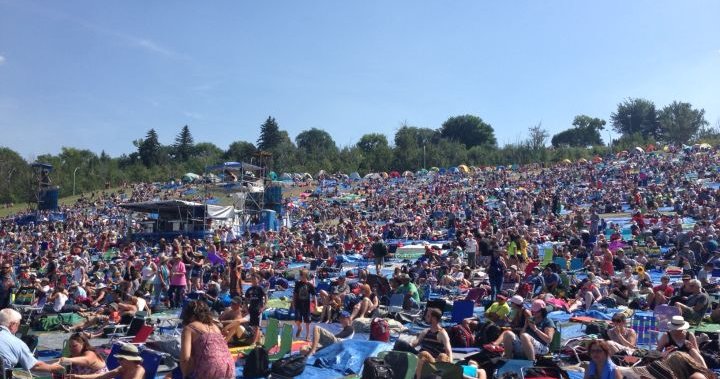 EDMONTON – Edmonton is having a busy summer festival season. From Improvaganza and Canada Day to the Edmonton International Street Performers Festival and K-Days, there is something for everyone.

(We also share your favorite photos from these events using the hashtag #OurYEG. Scroll down to see them on our live blog!)

Here is a list of some of the festivals and events taking place in and around Edmonton this summer (and beyond).

For 13 days each summer, The Works unleashes art and design across one square mile of downtown Edmonton. Free to the public, the festival is an extravaganza of visual arts, design and entertainment that attracts artists and visitors from around the world.

The Edmonton International Jazz Festival has sounds to suit all tastes as it features more than 55 events with more than 250 musicians on seven different stages. Artists from around the world will perform in Churchill Square, the Yardbird Suite, the Old Strathcona Performing Arts Center, the Westin Hotel and other Edmonton venues.

Ever wanted to know what happens at the Edmonton Valley Zoo after the gates close? Adults can drink wine while the kids explore the zoo.

National Aboriginal Day takes place on June 21st. It’s a special day to celebrate the unique heritage, diverse cultures, and excellence of the First Nations, Inuit, and Métis in Canada.

The Freewill Shakespeare Festival returns to Hawrelak Park to present “As You Like It” and “Coriolanus”.

Pets in the Park is the only day of the year that pets are welcome at Hawrelak Park.

Events take place all over the city.

READ MORE: How to Celebrate Canada Day 2015 in and around Edmonton

This 10-day event attracts acts from around the world to appear in more than 1,500 outdoor shows. With acrobats, jugglers, musicians and more, there is something for all ages.

The Edmonton Eskimos will play their first home game of the 2015 CFL season against the Ottawa Redblacks on Thursday, July 9th.

More than 1,000 Indigenous youth from across Alberta will come together for a week of competitive sports, traditional games and other special events.

Make-A-Wish Rope for Hope encourages people to rappel down at Edmonton’s Westin Hotel to raise funds for the Make-A-Wish Foundation.

The annual K-Days Parade will be broadcast live by Nancy Carlson, Kent Morrison and Mike Sobel of Global Edmonton from 10 a.m. to 12 p.m. You can also watch the parade live online at Globalnews.ca/edmonton.

From your favorite rides and games to incredible performances and concerts, K-Days is one of Edmonton’s biggest summer festivals.

This year’s Edmonton Folk Music Festival takes place in Gallagher Park and features artists such as Of Monsters and Men and Lord Huron.

Cariwest is an annual three day Caribbean Arts Festival held in the heart of downtown Edmonton.

Three of the best chefs in town come together to cook picnic favorites and all that goes with them. The event is a fundraiser for seniors in CapitalCare facilities.

SupercaliFRINGEilistic is taking over Old Strathcona for 11 days this summer. This year’s festival features more than 1,600 live indoor theater performances in 50 venues across the city. Look out for Official Fringe Reviewer Todd James every night on Global Edmonton.

Join Global Edmonton as we broadcast live sports and weather from the Commonwealth Stadium before the Edmonton Eskimos game.

The Mosquers attracts talent from across Canada and the United States to Edmonton’s Jubilee Auditorium. The event includes a red carpet ceremony, the screening of the finalist short films, a feature entertainment component, and a final awards ceremony.

Edmonton’s Alternative Music Festival SONiC BOOM is on the move. The festival, which has been held in Northlands since it began seven years ago, will call Borden Park home this year. The grassy park across from 112 Avenue from Northlands will host the two-day rock music festival.

This new event gets you on a fundraising walk and takes you on an adventure through the Grandview Heights community while you raise funds for the CapitalCare Foundation. It’s a great way to celebrate Grandparents Day.

The annual walk, held in more than 45 communities across Canada, raises much-needed funding for ovarian cancer research. Ovarian cancer is the most serious form of cancer in women, with 2,600 women diagnosed each year.

The KWCS 19th annual Walk and Run is a family affair. The 3-mile run or 2.5-mile walk raises funds for the Kids with Cancer Society.

This summer festival celebrates everything cinematic. More than 15,000 people take part in 150 films, galas and events every year.

The 2015 edition of the Edmonton Comedy Festival will feature more than 30 comics from across North America in venues across the city.

For more information on other events in and around Edmonton, please visit Global’s OurYEG website.