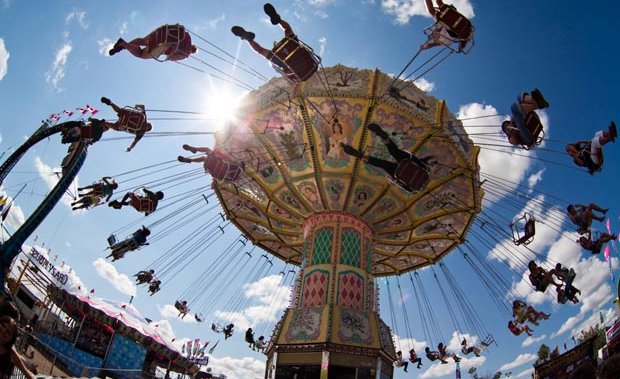 Share your #SmilingSelfies with us while you enjoy Edmonton’s Summer Festivals! Just post your photo with the hashtag #SmilingSelfies and it will appear on our live blog!

EDMONTON – Edmonton is back to festival season. From Pride to K-Days, Canada Day to the Edmonton International Fringe Festival – there is no shortage of activities this summer.

Here is a list of which festivals are taking place in and around Edmonton this summer, when and where (feel free to bookmark them).

The annual Pride Parade takes place downtown on Saturday, June 7th at 12 noon. It shows the unity and diversity of the LGBTQ community and its allies. You can see the route here.

This event is proudly sponsored by Global Edmonton. Nightly shows of improv comedy from around the world, stand-up comics, sketch artists, music and more will be entertained with top improv teachers at this year’s Improvaganza Public Workshops!

This event is proudly sponsored by Global Edmonton. The Works International Visual Arts Society hosts the Works Art & Design Festival early this summer, which attracts artists and patrons from around the world and nurtures the energy and imagination of downtown Edmonton. The Works is a free event that attracts audiences of all ages and interests, and features over 200 exciting exhibitions and special events for the public.

This event is proudly sponsored by Global Edmonton. The Edmonton International Jazz Festival has sounds to suit all tastes during its 10-day musical celebration. JazzFest features more than 50 acts from Edmonton, Canada and around the world in Churchill Square, the Yardbird Suite, the Old Strathcona Performing Arts Center, and stages across the city.

Experience the Edmonton Valley Zoo and all it has to offer after hours. From animal encounters to food and wine tastings, there is something for everyone. All proceeds will be used to support the next phase of development – Nature’s Wild Backyard.

This event is proudly sponsored by Global Edmonton. The Edmonton International Street Performers Festivals feature 1,500 outdoor performances by international street artists, face painters and rovers. There are also Be Your Own Busker workshops and Kids’ World activities, daily group shows by the Troupe du Jour, and indoor late night madness cabarets for adults. With all of this, you’re bound to find a smile or two at the Sir Winston Churchill Square festival.

Global Edmonton will be keeping an eye out for your #SmilingSelfies on Twitter and Instagram throughout the festival!

This event is proudly sponsored by Global Edmonton. In its 26th season, the Freewill Shakespeare Festival Edmonton brings a new breed of summer Shakespeareience with the move to the Myer Horowitz Theater. This year the festival presents a comedic favorite: The Taming of the Shrew.

With all of the best food and drink in town gathered in Sir Winston Churchill Square, this festival is sure to hit your sweet spot. Beer or wine, sweet or savory, gluten-free or gluten-free, folk music or jazz – whatever you like, you will find it at Taste of Edmonton 2014!

This event is proudly sponsored by Global Edmonton. The 2014 Servus Heritage Festival will mark the 39th year of this first three-day showcase of Canada’s vibrant multicultural heritage. With 60 pavilions representing over 85 cultures, there is delicious cultural food, wonderful creative displays, crafts, works of art, clothing, and plenty of opportunities to chat with people who love to talk about their cultural roots and communities in Canada. Come and enjoy the sights, sounds and smells from around the world in beautiful Hawrelak Park!

Sit in a low lounge chair and soak up the backdrop of the city skyline and the grassy slope down Gallagher Hill to the main stage, nestled in a natural amphitheater, the epicenter of a highly anticipated annual tribute to all music in August. A diverse line-up of bands from all over the world mixes folk, Celtic, bluegrass, blues, gospel, roots, world beat and even some alternative rock. The vibe of the event is unique, as anyone who attended will tell you, with jam sessions, lesser-known acts, children’s music and workshops on several smaller stages and rumors of big bands banding together in epic musical surprise clubs.

The Rock Music Festival showcases some of the greatest acts in local and national classic rock. In its fourth year, the festival includes Burton Cummings, Colin James, Trooper, Chilliwack, Doug and The Slugs, David Gogo, and Gibson Block.

Glitzy parade costumes, dancing in the streets to island rhythms, and exotic cuisine turn downtown Edmonton into a bustling Caribbean outpost. Join a glittering procession of 500 extravagantly costumed performers and masquerades who follow the carnival rhythm of steel pan bands, calypso sounds, and soca music as the Grand Costume Parade snakes through the streets of Edmonton. The three-day, no-entry Caribbean Arts Festival has brought the tropics to Edmonton every August for three decades.

The Fringe is proudly sponsored by Global Edmonton. The 33rd Edmonton International Fringe Theater Festival is a journey back in time to the 1970s with “Fringed and Confused!”. Fringe Theater Adventures has put on its bell-bottoms, pulled up its tube socks and has wistfully returned to the era of record stores and overalls. Let yourself be carried away by what it means to be chipped and confused with a look back at our early years. Look out for Official Fringe Reviewer Todd James every night on Global Edmonton and post your #smilingselfie on Twitter and Instagram throughout the festival!

The Edmonton Dragon Boat Festival promotes dragon boat races for fun, sports and recreation. The festival showcases Asia and multiculturalism in Edmonton. Secure your spot on a boat or cheer for participants as they cruise down the mighty North Saskatchewan River.

Top acoustic and electric blues acts from around the world rock the house at Western Canada’s premier blues event. The festival features the best in the blues for three days with Canadian and international Grammy, Juno and Blues Music award winners.

The Canadian Derby is the largest event in western Canadian racing.

Experience great music – from classical to pop to just plain fun – in the great outdoors during the Edmonton Symphony Orchestra’s Symphony in the City. Enjoy the sounds of the internationally renowned and innovative Edmonton Symphony Orchestra as it hosts its popular annual Labor Day weekend festival. Symphony in the City has something for everyone: a Disney adventure, a Celtic collaboration, and monumental classical works.

The film festival is proudly sponsored by Global Edmonotn. Every fall, Edmontonians feast on everything cinematic for 10 days. It’s a veritable buffet of the best new indie films from around the world. The program includes 55 feature film slots and more than 100 short films programmed in feature film packages. Look out for Todd James’ film festival reviews every night on Global Edmonton!

For more information on other events in and around Edmonton, please visit Global’s Out There website.

Letters from Thursday: Edmonton is lagging behind in attracting large enterprise