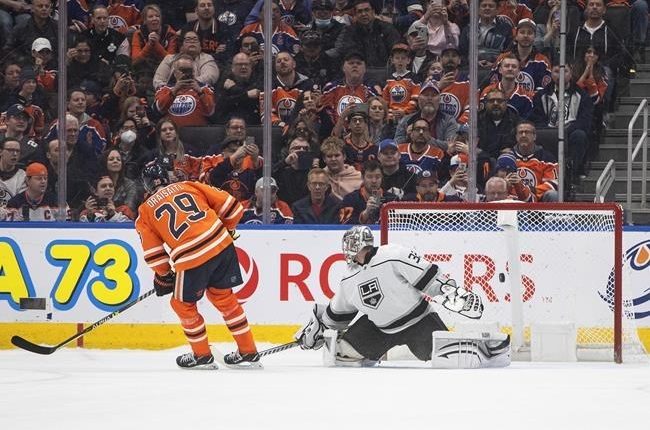 EDMONTON — It certainly had the feel of a potential first-round playoff matchup.

Leon Draisaitl and Connor McDavid both scored in regulation as well as the shootout as the Edmonton Oilers earned a 4-3 win over the Los Angeles Kings on Wednesday night.

Edmonton captured a second straight victory to move to within a point of Los Angeles for second in the Pacific Division.

“I think both teams knew what was at stake. It was a tight game, back and forth,” Draisaitl said. “That was a playoff-type of game.

“It was good to see that we can stick with it and come out on top at the end. That is a great sign for us. Who knows, we might see this team sometime down the stretch. It was a big two points for us .”

McDavid added an assist to reach the 100-point plateau, Cody Ceci also scored and Mikko Koskinen had 38 saves for the Oilers (38-25-5) who have won eight straight on home ice.

“We won the game and, for us, that was the important thing. It was a ‘Whatever it takes,’ attitude,” said Oilers coach Jay Woodcroft. “When you’re not feeling 100 per cent, the counter-thrust to that is doing whatever it takes to get the two points and it’s a full credit to the people in the locker room who found a way and did whatever it took.”

Alexander Edler, Quinton Byfield and Carl Grundstrom replied for the Kings (36-23-10) who have lost three of their last four games.

“I think every point is important and we definitely wanted two,” Byfield said. “It’s good that we came away with one, but our minds were on two. They’re right behind us in the standings and we want to make the gap bigger.

“The intensity was there for both sides and it made for a really fun game, but it sucks coming out on the short side of it. I thought we showed great resiliency coming back from 3-1, but I think we needed to complete the full comeback.”

Los Angeles started the scoring three minutes into the game with a goal on its first shot. Edler floated a shot from the point that ticked a defender and got past Koskinen.

Edmonton tied the contest less than four minutes later as Ceci walked in and sent a wrist shot glove side past Kings goalie Jonathan Quick.

The Oilers went up 2-1 with two minutes to play in the opening frame. Zach Hyman muscled a backhanded pass through the crease to Draisaitl, who chipped in his 49th goal of the season, tying Toronto’s Auston Matthews for the league lead.

Five minutes into the second, McDavid notched his league-leading 100th point, sending a pass from behind the net that bounced in off of Alex Iafallo. It’s the fifth time in his career that McDavid has hit the century mark, becoming the 19th player in NHL history to achieve the milestone.

The joy in Edmonton was short-lived, however, as the Kings came storming back on a pair of Oilers giveaways.

Just 47 seconds later, Byfield created his own space and ripped a shot past Koskinen. And 14 seconds after that, the Kings made it 3-3 when Grundstrom stole a puck in a battle in front of the net and scored his eighth.

Edmonton looked to have regained the lead midway through the second, but had a goal taken back for goaltender interference.

There was no scoring in the third period or a frantic overtime session.

The Kings are right back at it on Thursday as they head to Calgary to face the Flames. The Oilers host the St. Louis Blues on Friday.

This report by The Canadian Press was first published March 30, 2022.