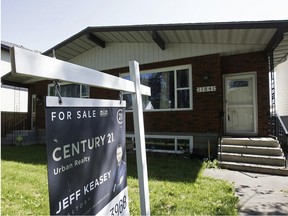 Residential unit sales dropped in the Greater Edmonton area, led by a decline in single family detached home sales, which are down 12 per cent year over year. Photo by David Bloom /Postmedia

Sales are falling in Edmonton’s residential real estate market, but the sky isn’t, according to realtors, who point to higher borrowing costs affecting demand paired with a return to more seasonal conditions after a frenzy of activity earlier in the year.

“There was definitely a big drop last month, and we haven’t seen that for some time,” says Paul Gravelle, chair of the Realtors Association of Edmonton.

Total residential sales for the Greater Edmonton area fell by nearly 24 per cent in July from June and were down more than 10 per cent year over year.

Leading the decline in activity were single-family detached home sales falling more than 24 per cent month over month and more than 12 per cent year over year.

To Gravelle, the change in activity was not surprising.

“The market can only go up so long,” he notes about records being broken for sales and prices earlier in the year.

“It has to plateau at some point, and we were seeing that occur over the last couple of months amid increasing interest rates.”

Still, home prices managed to climb from July last year, increasing about seven per cent to reach an average of about $411,000.

That said, prices did decline a little more than one per cent from June.

Single-family detached homes experienced the largest gain in average price up five per cent year-over-year to about $489,000, though down one per cent from June.

Local realtor Kathy Schmidt says the slowdown is notable, given the previous string of several months of unusually strong activity.

“The rapid rise in interest rates has absolutely had an impact,” says Schmidt, broker/owner of Schmidt Realty Group. Recently, “a potential sale … ​​failed to proceed because previously approved buyers couldn’t qualify with the new rates.”

She further points to other conversations with buyers recently about their newly reduced purchasing power.

“They have the difficult decision to purchase at a lower price point they can afford now, or wait to save a larger down payment.”

For those in a position to buy, however, the current conditions are more favorable, Gravelle says.

“The buyers out there are getting more bang for their buck.”

In contrast, sellers must up their game to stand out amid rising new listings, up more than six per cent year to date.

That means a new “coat of paint for the kids’ room” or being more flexible with showing hours for their home, Gravelle adds.

“You don’t want to miss opportunities because buyers are now a little fewer and farther in between.”

Still, activity should pick up heading into the traditionally busy fall season.

“We’ll see people come back to the market where they want to get it done before the snow flies,” he says. “It’s the last big push for the year, so September and October should be pretty decent.”