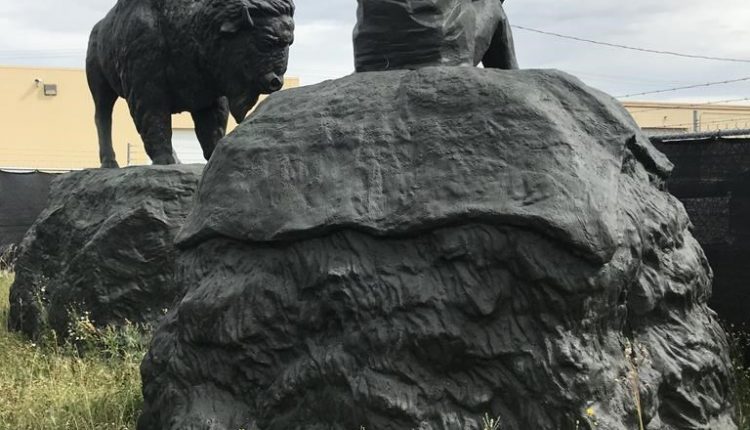 EDMONTON — An Indigenous educator and community advocate says he raised concerns over a now-scrapped public art project that had been planned for Edmonton’s river valley, but he was not listened to.

“If you’re going to have Indigenous consultations, you have to actually listen,” said Lewis Cardinal, who was part of the Wicihitowin Talking Circle, an Indigenous consultation group that advised the City of Edmonton and Edmonton Arts Council on sculptures that were to be installed near the Walterdale Bridge spanning the North Saskatchewan River.

Edmonton city council announced earlier this week that it would not be installing sculptures the city commissioned in 2010 from artist Ken Lum, because they “may cause harm and induce painful memories.” They were intended to be part of the Walterdale Bridge replacement project.

A description of the sculptures on Lum’s website says: “The Buffalo and the Fur Trader stare warily at one another across the expanse of the North Saskatchewan River … the wisdom offered by First Nations and Indigenous peoples versus the folly of the rapacious capitalist represented by the had white man atop a pile of buffalo pelts.”

Cardinal said using the buffalo as a symbol of Indigenous people romanticized history and what it means to be Indigenous.

He also said it would also be historically inaccurate to highlight the buffalo.

“Beaver pelts were the main source to come out of Fort Edmonton,” he said. “This isn’t Edmonton.”

During the fur trade in Edmonton, beaver pelts were the largest commodity that developed the economy for settlers and indigenous people. Buffalo were already becoming scarce at this time and were used as a food source, not for economic stability.

Members of the Talking Circle also raised concerns about choosing a non-Indigenous person to tell an Indigenous story.

Lum, whose pieces cost a total of $375,000, said in an email earlier this week that “the work went through enormous oversight and approval from civic officials.”

Jenna Turner, a spokesperson with the arts council, and Francis Asuncion, with the City of Edmonton, said in a joint statement that artists were shortlisted by a committee made up of project team members and local artist representatives.

“There was no consensus at the Wicihitowin meetings on the appropriateness of the final concept,” writes Turner and Asuncion. “Some members were pleased with the artwork direction while others raised concerns.”

The sculptures have been sitting in a storage container since 2016.

“The process for removing artworks from the collection is aligned with museum best practices and will honor and respect the artwork,” Turner and Asuncion said.

No decision has been made about what to do with the sculptures.

Lum said in an email he did not intend for the art to celebrate colonialism, but to start a discourse on Edmonton’s colonial history.

“Perhaps the city is not ready for a real dialogue about its colonial past and the condition of coloniality that continues to mark the present,” said Lum. “That was my intention with the work, not to celebrate colonialism, as the city suggests.”

This report by The Canadian Press was first published Aug. 26, 2022