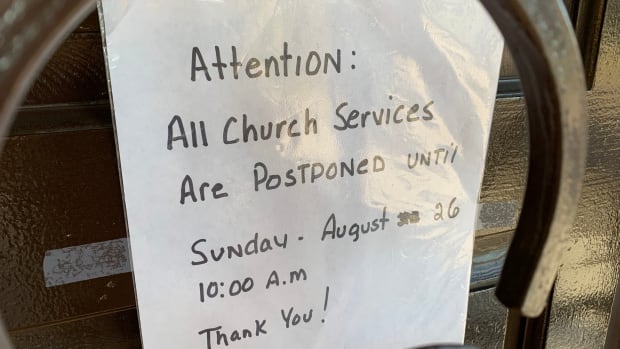 Public health officials are investigating a COVID-19 outbreak at a North Edmonton church that spread to the community for more than two weeks.

“It’s a powerful reminder that coming together in large gatherings risks sharing more than fellowship, it risks sharing the COVID-19 virus,” Hinshaw said.

“We must remind this that we must all stubbornly follow all measures, even when we are tired of washing our hands, wearing a mask and not being able to hug the people we care about.”

Alberta Health advises anyone who attended Church between July 26 and August 12 – and anyone who is in close contact with an attendee – to book a COVID-19 test online and monitor for symptoms.

The church, which has about 150 members according to Hinshaw, was added to the list of outbreaks in the Edmonton Zone on the province’s COVID-19 website.

Former parishioner Amanda Potts said services were suspended last week but church officials had not notified the congregation of the outbreak.

She said that her mother and sister recently attended church services. She said her sister is now showing symptoms of COVID and is waiting for a test.

Potts grew up in church but stopped attending about eight years ago. She said her mother and sister have been with us for 30 years.

Her mother and sister were contacted by state health officials on Sunday, but the information is still not publicly available, she said.

Potts said the lack of notification was worrying, especially for her mother, a senior citizen and cancer survivor who was in close proximity to a churchgoer who later tested positive.

“Last week my sister got a call saying the church was canceled and everyone was like, ‘What’s wrong?’” She said.

“My mom never got a call and then it turned out that through the grapevine we found out that the people in the church had been diagnosed with COVID, but everything was kept a secret.”

Services at Bible Pentecostal Church in North Edmonton have been suspended as health officials investigate an outbreak of COVID-19. (Dave Bajer / CBC)

The Lauderdale Church has a ward of more than 100 people. Services take place at least three times a week on Wednesdays, Fridays and Sundays.

A handwritten sign was posted on the door of the church on Tuesday morning.

“All services will be postponed to Sunday, August 26,” it said.

CBC News called the church office and the pastor of the ward. The calls were not returned.

Officials are working to contain the spread, according to Alberta Health.

“With all outbreaks, health officials take swift action to protect the public and limit the spread,” Alberta Health spokeswoman Sherene Khaw said in a statement emailed.

“All positive cases are isolated, aggressive contact tracing is ongoing, and health officials are investigating possible sources of transmission and epidemiological links.”

In an email to CBC News Tuesday afternoon, officials from the Alberta Health Service said the contact follow-up was ongoing for those linked to this outbreak and those considered at risk had been notified of the outbreak.

“According to standard practice, AHS will directly contact any person exposed to confirmed cases and ask those people to self-isolate and be tested for COVID-19.

“Only those people who were contacted directly by AHS are considered to be exposed in any case.”

AHS said it was working with church leaders and had received a membership list.

“Internal communication is a decision that falls to the individual organizations,” says the email.

“If there is a public risk, AHS will conduct public communications.”

‘What took so long?’

Potts said personal church services were suspended this spring. They were resumed with physical distancing and masking protocols a few weeks ago, she said.

She said a public notice should have been posted immediately on the Alberta Health Services website. Everyone in the congregation should have been made aware of the risk of exposure, she said.

“As far as I understand, the first case was discovered over a week ago, so what took so long?”

Reports of outbreaks are required under the State Health Act. The health authorities are responsible for investigating and managing the outbreak.

In accordance with Level 2 guidelines for places of worship operating during the pandemic, if there is an on-site exposure, all staff, community members, and volunteers present at the time of exposure should be informed that exposure may have occurred.

Attendance lists from the time of exposure should be shared with Alberta Health Services for contact tracing purposes.