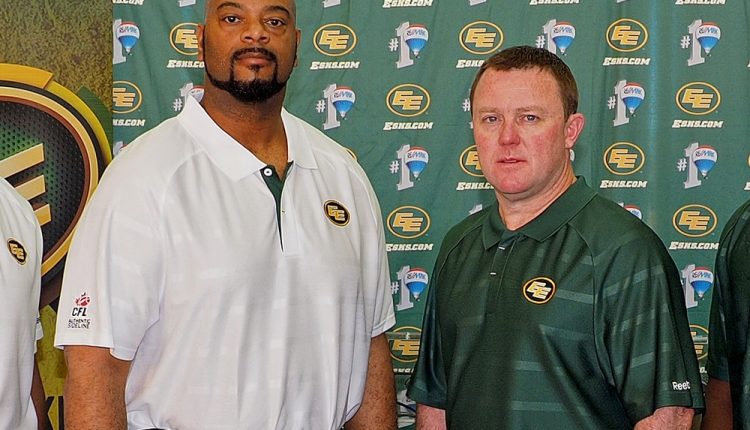 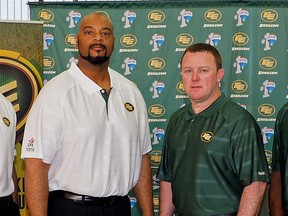 The two top coaches responsible for a revamped staff for the Edmonton Elks aren’t just back together.

Chris Jones and Stephen McAdoo are more like each other’s yin to yang, peanut butter to their jelly, or maverick to their goose.

Regardless of the reference, the endgame is the same. They are inseparable.

Not only were they the best offensive and defensive heads that guided the Green and Gold to their last Gray Cup championship in 2015, but they’ve stayed very close throughout their professional coaching careers.

Both entered the college football scene in the same state in the mid-1990s, with Jones being a research assistant at Tennessee Tech before coaching the defensive line at the University of Tennessee at Martin, while McAdoo tight ends at Middle Tennessee State trained.

And since then, they’ve been together more often than apart.

From there, Jones made the leap to the Canadian Football League as defensive line coach with the Montreal Alouettes in 2002, before being promoted to defensive coordinator the following season when McAdoo was brought on board as co-offensive coordinator.

After five years together, Jones joined the Calgary Stampeders and McAdoo joined the Toronto Argonauts before they were reunited as offensive and defensive coordinators in Edmonton when Jones rose to the head coaching ranks in 2014.

Both went together shortly after their run to the championship the following year and spent the next three years with the Saskatchewan Roughriders before Jones attempted coaching in the NFL.

Last year, McAdoo coached the offensive line in Toronto, where Jones was employed as a mid-season defensive adviser before being reinstated by Edmonton after a 3-11 season, which led to the mass layoff of general manager Brock Sunderland and head coach Jaime Elizondo, along with President and CEO Chris Presson.

“Well, it’s a yin and yang,” Jones said, opting for ancient Chinese philosophy about how opposites attract and complement each other rather than the top gun reference or delicious brown bag lunch. “I’m very positive and have a tremendous personality and Macs are on the other side of the equation.”

The always serious Jones – known in the league as the Man in Black for a reason – even made himself laugh. Oh, they’re opposites, alright, but McAdoo is hardly the pair’s shrinking purple.

“I’ll let him speak then,” McAdoo said, clearing his throat. “I’ll be the bad guy. I think other people would say otherwise, but…

“No, it was a great time with Chris. I learned a lot from him. We have been together and have gone through many trials and tribulations and learned from those processes.

“It gets to the point that when he thinks something, I think almost the same thing.”

While they’re on the same wavelength on the sidelines of a soccer field, off the field their relationship is even deeper.

“He’s just like a brother like I had. Outstanding football coach,” Jones said, adding that the shared view of coaching is as much a lifestyle as it is a profession. “And we didn’t hire anyone who didn’t bring anything.

“In fact, all I do from the moment I wake up in the morning is try to help us win a football game. That’s it.”

As the league progresses, McAdoo has done his job for him, having returned from offense coaching a year ago to coordinate the Edmonton offense.

The scoring eventually slides down. But he says it’s not due to a lack of effort or conservative play-calling on behalf of his fellow OCs.

“Every coordinator I know is on the offensive. They’re attacking,” McAdoo said. “Basically it’s about execution, it’s about how the defense plays this game. Different things. Sometimes things will be there, sometimes not. You will be making your recordings and it will depend on whether or not you connect to those recordings.

In and out: On Tuesday, the Elks announced a one-year contract extension for Canadian safetyman Jordan Hoover, who has 111 tackles and three interceptions in 66 regular-season games since he was drafted by Edmonton in the fourth round (31st overall) from Waterloo in 2017 … you also added a pair of University of Miami products in RB Trayone Gray at 6ft 2 and 240lbs and OL Jahair Jones at 6ft 4 and 310lbs.

Sign up to receive daily headlines from the Edmonton SUN, a division of Postmedia Network Inc.

A welcome email is on the way. If you don’t see it, please check your junk folder.

The next edition of Edmonton Sun Headline News will be in your inbox shortly.

Postmedia strives to maintain a vibrant but civilized forum for discussion and encourages all readers to share their views on our articles. Comments may take up to an hour to be moderated before they appear on the site. We ask that you keep your comments relevant and respectful. We’ve turned on email notifications – you’ll now receive an email when you get a reply to your comment, there’s an update on a comment thread you follow, or when a user you follow comments follows. For more information and details on how to customize your email settings, see our Community Guidelines.