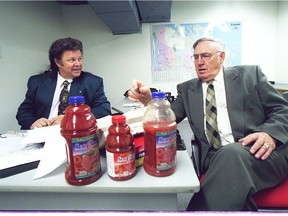 Instead, Clarke was mourning the business partner he met 46 years ago when he caught the singer falling off an Edmonton stage.

“When he sang, he gave it his all. You know why? He enjoyed it. He enjoyed the reaction from the people,” said Clarke, 83.

Curtola, a 1960s heartthrob and longtime Edmonton resident, died Saturday while visiting Edmonton, Clarke said. He was 73. The cause of his death was not immediately known.

“To his fans … he loved each and every one of you more than you will know, and never took for granted the life you gave him. He would want you to do something kind for one another today and each day,” Chris wrote.

Born in Thunder Bay, Curtola was discovered during a radio station’s singing contest in 1959, Clarke said. He played his first professional show in Winnipeg in 1960, and his hit Fortune Teller topped the charts in 1962. 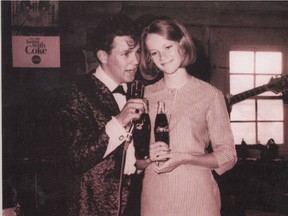 In 1964 Bobby Curtola was a pitchman for Coca-Cola, singing a version of Things Go Better with Coke PR

In August 1965, screaming Curtola fans clamoring for an autograph in downtown Edmonton forced the singer’s managers to shelter him in a car’s passenger seat, where he slipped the signed papers in and out through a partially open window.

The writer and performer of the 1964 advertisement claiming “Things go better with Coca-Cola” ultimately racked up 25 Canadian gold singles and 12 Canadian gold albums.

It was at a 1970 concert at the Hotel Macdonald when former Canadian Football League player Clarke caught Curtola when he accidentally tipped backward off the stage during a performance of When the Saints Go Marching In.

“He never stopped singing,” Clarke said, as he described pushing the singer and his microphone back upright.

After the show, Curtola sought the man who came to his rescue. It was the beginning of a four-decade friendship that would lead to myriad fundraising events, business partnerships and good times.

Curtola, who became Bob Hope’s opening act and spent years performing in Las Vegas showrooms, settled in the Edmonton area in 1975 when his teen idol days had waned.

A regular performer at Klondike Days and countless charitable events, Curtola composed an election jingle for his friend Ralph Klein when the then-Calgary mayor took his first crack at provincial politics.

The entrepreneur and Order of Canada honoree founded companies that bought a hotel and truck stops across Canada, and made an unsuccessful bid for ownership of the Ottawa Roughriders in 1991.

In 1997, Curtola and Clarke tried to take on Mott’s Clamato juice with a competing tomato drink called SeaCzar. They produced the drink in Edmonton for about three years before the business ran into trouble.

Curtola moved to Nova Scotia about a decade ago after falling in love with a woman there, Clarke said.

Curtola was staying at his son’s house in Edmonton when he met with Clarke on Thursday and Friday to plan future business ventures.

“We were all talking like a bunch of old guys that were talking about tomorrow. Tomorrow didn’t come for Bobby,” Clarke said.