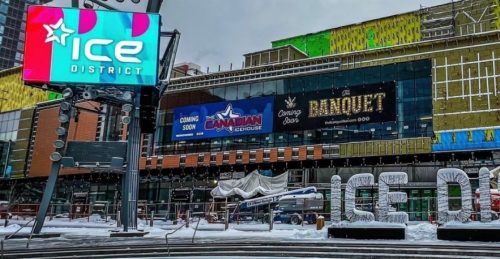 Get ready, Edmonton, because the long-awaited Canadian Icehouse and Banquet Bar are finally set to open.

Coming to Canada’s largest mixed-use sports and entertainment district, the downtown Ice District will soon see the opening of not one but two massive new sports bars.

Originally announced back in January, this has been in the works for a while and it now looks like both spots will be opening up sometime in September.

The Banquet Bar and The Canadian Icehouse (both part of The Canadian Brewhouse family) will open side-by-side in Edmonton’s Ice District, making for a truly epic spot.

This Canadian Icehouse will be the flagship location for The Canadian Brewhouse, featuring the largest outdoor patio in Western Canada. There will be not only fireplaces and outdoor games out on this massive space but also batting cages!

As if that wasn’t enough, there will also be a sub-zero vodka tasting room that is made entirely out of blocks of ice and snow.

This will be the third location for The Banquet Bar, the first one being in Fort McMurray and the second in Calgary. Those locations have a bowling alley, rooftop patio, billiards, and games, so you know this new outpost is going to be an absolute blast.

Edmonton’s Ice District has been growing quickly since the revitalization of the area, and this is another huge step for the community.

With Rogers Arena located right here in the Ice District, both The Canadian Icehouse and The Banquet Bar are sure to be extremely popular spots all year long.

Stay tuned for updates about the official opening of both of these new spots.