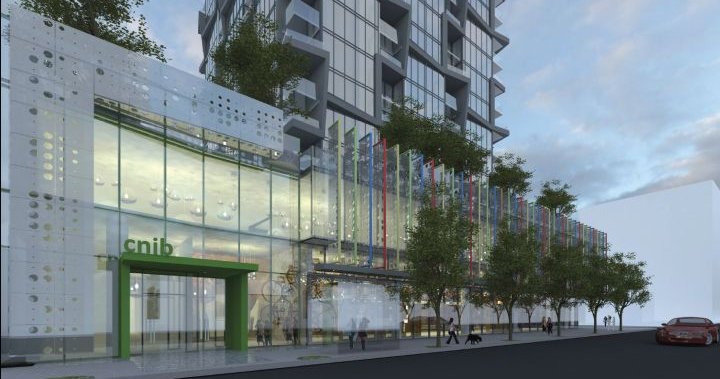 The Edmonton City Council has unanimously approved a new development specifically designed for the blind and visually impaired in the Oliver neighborhood of Edmonton.

The Canadian National Institute for the Blind plans to replace its office at 120 Street and Jasper Avenue with a 35-story new building. The mixed-use tower will include commercial and retail space, including CNIB offices, as well as apartments for the blind and visually impaired.

“That knocks it out of the park,” said Mayor Don Iveson of the building’s design. “And yes, it’s a tall building, but when people come up and deliver that kind of beauty and that kind of contribution – on-site or off-site or both – that’s what I’m looking for.”

READ MORE: Blueprint For Beauty: Are Edmonton Buildings Designed To Be Glare?

The CNIB works with the American architect Chris Downey, who after 20 years as an architect unexpectedly lost his sight eight years ago when he had to undergo surgery to remove a brain tumor.

From structured sidewalks and Braille on the doors to acoustic notices in the elevators and guidance systems in the corridors, the entire building is specially designed for the blind and visually impaired.

“The entrance is on the sidewalk, on the street, and a big challenge is how do you find the front door if you can’t see the sign where it is?” Downey took the example.

“Other things you can do is work with canopies and recesses like we have for the building so it actually sounds different,” he continued. “The sound – bouncing off the knock on the tip of your stick, hitting the building, and returning to your ear – gives you a good clue as to where a door might be.”

The Canadian National Institute for the Blind is hoping to replace its office at 120 Street and Jasper Avenue with a new 35-story building.

John Mulka, CNIB regional vice president for BC, Alberta and Northern Canada, said he was overwhelmed with Downey’s work.

“I think this will be a Hallmark system. It will be state of the art and it will be something that many Canadians will be jealous of and it’s great to have it right here in Edmonton. “

After losing his sight, Downey was forced to change the way he worked. Although he may not be able to physically see the projects he’s working on, Downey said he was customized.

“It’s really the reading of drawings by touch, which works pretty well and takes a little longer, but it has some advantages and some things that I really like about it.”

With much of his work now focused on the blind and visually impaired, Downey said he was excited to be working on the Edmonton proposal and believes more designs need to accommodate people with disabilities.

“The idea that we all quote ‘normally’ somehow and we all walk around with two legs and have typical standard procedures, see and all have sensory abilities is a fallacy,” he said.

“This is not a typical concept, and I think it’s a beautiful, wonderful concept that really expands the way we think about our buildings and their design, to really be there for the society that will use them.”

Cease Spraying: The Metropolis of Edmonton urges residents to not use herbicides in metropolis parks to manage weed outbreaks