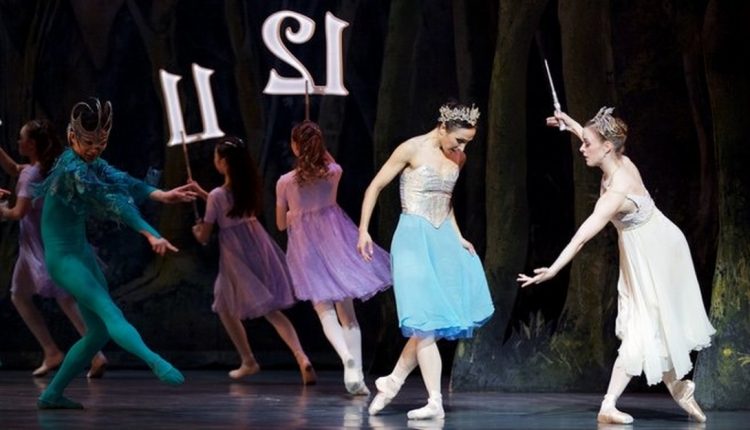 From the moment the curtain rises, the audience is immersed in the show’s whimsical magic. The Fairy Godmother (Alexandra Gibson) flits through a shadowy mansion, her bejeweled wand casting white light on lavishly dressed figures who appear to be frozen in time. Soon, the cavernous set is flooded with light, the Fairy Godmother out of sight, and the spotlight shifting to the wealthy ladies of the household. The audience then meets Cinderella (Heather Dornian), who dutifully stokes the fire while her stepsisters (Alexandra Hughes and Allison Perhach) and stepmother (Mariko Kondo) animatedly prepare for the royal ball. Despite being forbidden to attend, Cinderella receives an unexpected visit from a disheveled beggar turned Fairy Godmother along with a glittering gown and palace-bound carriage.

Dornian is lovely in her graceful portrayal of Cinderella, her movements lithe and expressive. She especially shines as her character dreams out loud of attending the ball, mesmerizing with a wistful solo in which she twirls with a yard of silky blue cloth. Her excitement is palpable as she descends the grand palace staircase towards the awestruck prince (Kelley McKinlay) and as the pair dances together. The duo are a delight to watch as they bring the classic romance to life.

The story may be Cinderella’s, but her stepsisters steal the show more than once. Alexandra Hughes and Allison Perhach earn big laughs with their exaggerated facial expressions and mannerisms as the stepsisters try and fail to dance elegantly. Instead of vicious and conniving, these dopey stepsisters are blinded by the shiny promise of the royal ball, barely acknowledging Cinderella’s presence. As the stepmother, Mariko Kondo is a formidable figure, showing tough love for her goofy daughters and cold disdain towards Cinderella. Joining the company is the Alberta Ballet School’s children’s cast, who flit among the action in the featured roles of sprites.

A dazzling fairy tale calls for a stunning set and costumes, and Cinderella delivers. Peter Farmer’s sets are intricate and atmospheric and his costuming whimsical. Though Cinderella’s evening gown is not nearly as exquisite as the breathtaking pastel gowns of the court ladies, her famous slippers have an irresistible sparkle that brightens as the time edges closer towards midnight. Christopher Anderson’s choreography is masterfully executed and the sweeping score is played beautifully. Thoroughly escapist, this production of Cinderella is not to be missed.

Cinderella plays Edmonton’s Northern Alberta Jubilee Auditorium until May 14. Masks are mandatory for all audience members.

Seizure of contraband at Edmonton Establishment