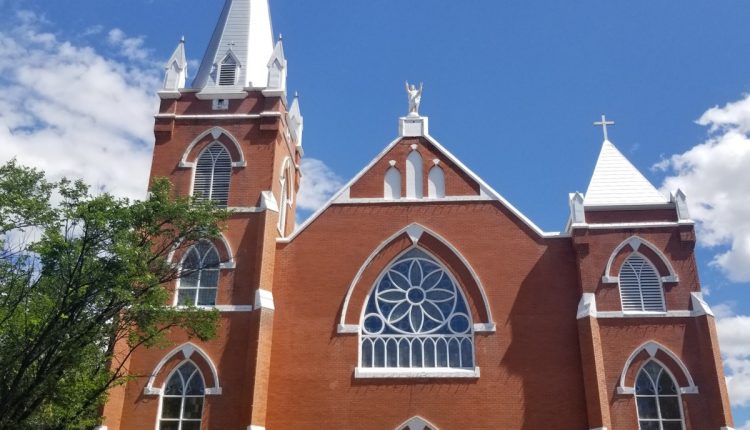 A highlight on Edmonton’s Church Road, which welcomes the Pope right now

When Theresa Yetsallie walks through her Edmonton inner-city neighborhood of McCauley, one of the things she enjoys most is meeting people coming to or heading out of one of the community’s churches.

Yetsallie lives off 96th Street, where a five-block portion of the street is designated as Church Street by the City, named so because of the about dozen churches representing Lutheran, Catholic, Buddhist and Pentacostal denominations, to name a few.

“It’s beautiful, there’s churches everywhere you turn,” said Yetsallie, shortly after attending a mass at her church, Sacred Heart Church of the First Peoples, which employs a mix of Catholic and Indigenous rituals in its services. “Everyone has their own experiences, and different backgrounds. I love to hear about it.”

Yetsallie, who turns 70 this year, credits the church for turning her life around about two years ago, following years of alcoholism. Originally from Meander River in northwestern Alberta, she has two uncles who were residential school survivors but “lost their lives to alcoholism,” she said.

“When I came here, I was lost, I was on the street,” Yetsallie said. “I turned my life around.”

Yetsallie hopes to be one of the Sacred Heart parishioners who gets to see Pope Francis, whose Alberta visit includes a scheduled stop at the church, hours after he delivers an apology at Maskwacis south of Edmonton for the role the Catholic church played in the trauma caused by residential schools.

“It’s a great blessing, it’s a great reconciliation,” Yetsallie said about the visit, noting she would be thinking about her uncles while Pope Francis is here.

In fact, Church Street seems a perfect backdrop for a Papal visit. The name appears on street signs for the portion of 96 Street between 105 Avenue and 110 Avenue, after getting official designation by the City in 2014. The street has boasted up to 13 operational churches at one time, largely serving the needs of waves of immigrants and newcomers going back to the early 1900s.

Some of the original wood structures have undergone renovations, or have been converted for other uses, like one currently used by an architectural firm with space for community gatherings, and another serving as the home for the Mustard Seed charity, which provides food and clothing for many of the community’s low-income and transient people.

But the City approved protection for church structures, designating them as historically significant so they can’t be demolished. Any development plans must incorporate the church designs within a three-storey limit, meaning no high-rises are allowed so the historical integrity of the community can be maintained.

“We tried to save the churches from demolition,” said Colleen Chapman, founder and president of the Friends of Church Street group, who successfully lobbied the City to preserve the historic nature of the area. “The churches on the street hold the story of Edmonton, the immigrants of Edmonton.”

At Sacred Heart, built in 1913, the usual rituals performed by a Catholic church are accompanied by First Nation drumming and smudging ceremonies, the latter unfortunately blamed for a fire at the church in 2020 when sage accidentally triggered a blaze. The fire led to discoveries of asbestos, requiring two years of renovations and a whopping price tag of $6 million, work that was being hastily completed in time for the Pope’s visit.

Chapman said she hopes the Pope’s visit brings international attention to and promotes the historical significance of Church Street amid challenging times for churches generally.

“Most are fighting for the survival of their programs,” Chapman said. “I would like to celebrate Church Street.”

Although the church preservation goal has been a success and there are tours available in the neighborhood, Chapman would still like to see an annual Church Street fair to celebrate the community’s history and diversity, focusing on the arts, music and food.

There is a much-repeated story around Church Street that it was once cited by the Guinness Book of World Records for having the most churches of any urban street of its size. But Chapman suggests it’s “wonderful folklore,” because she and others who tried to confirm the story were never able to do so. Some say the confusion may stem from the street being mentioned in a long-ago TV episode of Ripley’s Believe It Or Not.

Whatever the case, Sacred Heart’s Father Mark Blom says Church Street played a pivotal role in the development of Edmonton and the region.

“McCauley, was, you could say, the host neighborhood for immigrants and newcomers to this part of Canada” he said.

Early immigration waves included Italians, Irish, English, Portuguese and Croatians, “And in later years we had immigrants from Central America, and most recently we have a whole sub-community from Eritrea,” in East Africa. “Immigrants brought their churches too,” Blom said, adding the benefits received by immigrants who moved here for employment or to acquire land and take advantage of other opportunities often “came at the cost” of First Nation peoples.

With the visit to Sacred Heart, Blom says he hopes Pope Francis will see firsthand the efforts of establishing a parish which serves as “a place of encounter” for a community of Indigenous, Metis and Inuit faiths, mixed with many volunteers and parishioners who aren ‘t from First Nations.

“For many decades this has been a parish that serves people who are struggling, who are needy and may be working poor,” he said.