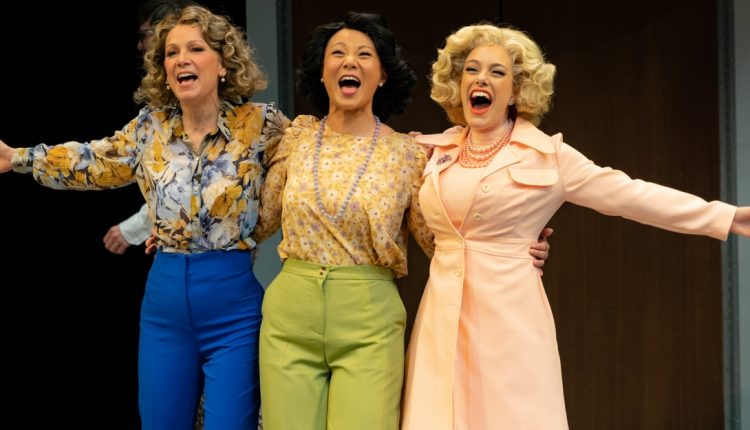 Judy, Violet, and Doralee dream of revenge on their lying, sexist, egotistical boss. Between being accosted with his crude comments, constantly referred to as “girls,” and being forced to maintain spartan workspaces, the women are through with being treated as inferior and are determined to get the working conditions they deserve.

Based on the 1980 film of the same name, 9 to 5 made its Broadway debut in 2009 to instant acclaim. With a book by Patricia Resnick and a score by country music legend Dolly Parton, it is a laugh-out-loud madcap comedy brimming with heartfelt solos and toe-tapping ensemble numbers. The final offering of The Citadel Theater’s 2021-2022 season, 9 to 5 is directed by Rachel Peake and features an all-female band led by music director, Janice Flower.

Newcomer Judy (Patricia Zentilli) is flung hat-first into the workforce after her cheating husband walks out on her. Much to her chagrin, her lack of knowledge about typewriters and document-spewing printers is the least of her worries. Her new boss, Franklin Hart (Juan Chioran), believes and intimidates every woman who crosses his path, forcing the female employees to tread on eggshells in his presence. However, after Hart concocts a particularly salacious rumour, Judy, along with her no-nonsense supervisor, Violet (Sharon Crandall), and misunderstood secretary, Doralee (Julia McLellan) take matters into their own hands.

The entire cast delivers exceptional performances. Zentilli showcases impressive vocals, particularly in Act 2 showstopper, Get Out and Stay Out. It is a delight to watch Judy gradually transform from a timid new typist into an assertive go-getter. Crandall exhibits both a commanding stage presence and heart-rending vulnerability as Violet while McLellan delivers impeccable comedic timing and a stirring rendition of Backwoods Barbie. The trio’s blossoming friendship is both poignant and hilarious, the latter especially so as each woman dreams out loud about how she would get revenge on their boss. The villain in question is played with menace by Juan Chioran while his sole female workplace ally, Roz (Kristin Johnson) earns big laughs with her unsuccessful antics to win his affections. The upbeat title song is another bonafide hit that sets the tone for this escapist show.

The drama unfolds across a tiered set designed by Dana Osborn and illuminated by Sophie Tang’s often playful lighting design. Flanked on both sides by two winding staircases leading to an elevator, the stage serves as stuffy office spaces to living rooms to a hospital mortuary. The most striking details are the large, bubble gum pink numbers representing those on a clock, the 9 and 5 cleverly situated on opposite sides of the backdrop. Dana Osborn’s costume design transports audiences back to 1979, most notably featuring an enviable array of shoes and dresses. It is impossible to not be immersed in the story and in Judy, Violet, and Doralee’s plights from the very beginning and to not cheer out loud for these determined heroines.

9 to 5 takes center stage at The Citadel Theater until May 29. Masks are mandatory for all audience members.

Photo by Nanc Price for The Citadel Theatre. Featuring the cast of 9 to 5, The Musical (2022)