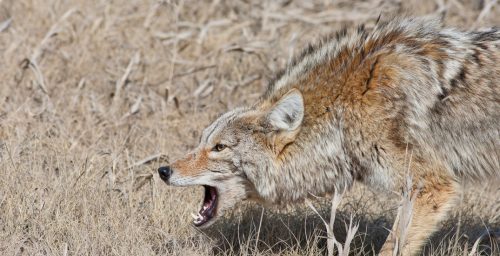 The City of Edmonton says five coyotes were involved in an attack on a person and their dog in a southwest Edmonton park earlier this week.

The city says that at approximately 10 am on Tuesday, May 31, a person was walking their dog on a roadway near Thibault Park in Terwillegar when they saw a coyote in an overgrown patch near a utility corridor.

The coyote approached in an aggressive manner, and the person attempted to scare the coyote away and leave, but approximately four more approached from different areas and attacked.

Park Rangers and Alberta Fish and Wildlife conducted a site inspection Tuesday morning and with the help of a City-approved contractor, two coyotes were destroyed.

Rangers and the contractor will continue to monitor the site in the coming days to assess for any remaining coyote activity.

Coyote attacks on humans are extremely rare; however, human behaviors can contribute to coyote habituation.

In this incident, the feeding of coyotes in the area was a factor in the attack as well as the dog’s presence and possible coyote pups in the area.

The city says to avoid conflict with people and pets, people should not illegally or inadvertently feed coyotes and keep dogs on a leash unless in areas specified as off-leash.

Intentional feeding of wildlife and excessive accumulation of edible materials on private and personal property is prohibited and carries a fine of $500.

Whenever possible, deter coyotes from the area by using “hazing” techniques (throwing sticks near them, shouting, clapping hands, etc).

Coyotes may become more aggressive if they have pups or during denning/mating season.

If anyone witnesses coyotes being fed, the city asks you please call 311.