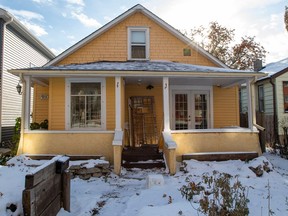 The additions include the city-owned Stone House and Summer Kitchen, located in an area partly occupied by the Whitemud Equine Centre, as well as the Figg Residence in Bonnie Doon and the Stein Residence in Westmount, the City of Edmonton said in an October news release.

The city describes municipal historic resources as buildings, structures, landscapes and the like that represent an important part of Edmonton’s development — whether they capture a unique architectural style or connect to a prominent person or moment in the city’s history.

The city is proud to preserve its heritage and architecture, and many Edmontonians are keen about the effort as well, senior planner Erik Backstrom said.

“It’s exciting to see these new heritage designations,” he said in the news release.

The Figg Residence in south-central Edmonton is a 1 1/2-storey house first built in 1914 on a farm near modern day 80 Avenue and 85 Street, the city’s heritage officer told councillors, in an October statement.

Ethel Figg and her husband Ernest, both originally from England, owned the house and moved it to its current location, now near the University of Alberta’s Campus Saint-Jean,

The couple had four children, including two boys who grew up to fight in the Second World War and died in service, the statement said.

The city has created financial incentives to help restore municipal historic resources, and the current owners of the Figg Residence will receive more than $90,000 from the city’s heritage resource reserve to rehabilitate the building.

Further west, the Stone House and Summer Kitchen were both built sometime around 1929 and are now leased by the Whitemud Equine Center Association, the city said.

Both buildings are unique (perhaps unsurprisingly so) in that they were constructed out of stone sometime around 1929, the city said, adding they were built on a farmstead just south of the Keillor Cabin, carrying the family name of former Edmonton councilor Fred Keillor.

The Stone House is set to receive $300,000 from the heritage resources reserve, while the Summer Kitchen will receive $100,000, the city said.

Farther north from the equine centre, near the northern edge of Westmount, the 1 1/2-storey Stein Residence exemplifies craftsman-style architecture, the heritage officer said, adding that the home was built in 1912 for a family of the same name.

Joseph Stein worked as a salesperson for several businesses including Edmonton Brewing and Malting Company, but when he died on Christmas 1944, his wife Jennie rented rooms in the house to supplement her income until her own death in 1968, the heritage officer said. The statement to councillors also noted that former city councilor Lance White owned and lived in the home from 1974 to 2011.

The current owners of the Stein Residence will receive $100,000 from the heritage resources reserve to rehabilitate the building, the city said.

According to the city, Edmonton has designated 175 properties has historic resources since 1985, including the four latest editions.

How effectively have you learnt your metropolis, Edmonton?